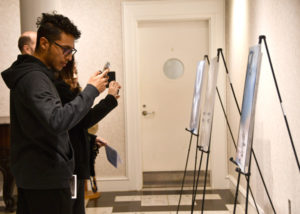 What began as poetry written to express human trafficking experiences evolved into a collaborative project that combines paintings, dance, video, singing and augmented reality to immerse the audience into a unique performance.

Denise Ritter Bernardini, associate professor of voice and opera at the University of Radford, made it a habit to volunteer at places that aided lives affected by human trafficking, from forced labor to sex trafficking. After hearing one woman’s story, Bernardini felt moved to create something with her art form that raised awareness of these people’s lives and to compel more to make changes for the future lives that may potentially be affected.

The experience started even before entering Flint Hall at the Falany Performing Arts Center. Six paintings were displayed in the Ken White Atrium, but the artwork, created by Carla Ciuffo, went beyond the physical pieces. By downloading the Artivive application onto their phones, viewers watched the artwork come to life, accompanied with the music from the “A Thousand Hands, A Million Stars” performance.

At the Community Gathering, Bernardini spoke on statistics of human trafficking, noting that Atlanta is a large hub for this criminal activity, as well as places that lay near country borders or cross-country highways. Bernardini also encouraged those in attendance to volunteer with local organizations working to fight this cause, such as Tabitha’s House and the Covenant House.

Bernardini then played the six-part video that featured two female dancers who performed with the poems written by Jane Mills Atwood and composed by H. Gerry Noh. The compositions are performed by Bernardini and pianist Andreea Lee.

Throughout the process of creating this project, Bernardini admitted to doubts of completion, yet praised the collaborating artists for the generosity. She encouraged the audience to use their art forms to do things that will change the world.

“One voice, one tiny thing, can make a ripple effect if you’re open to it,” Bernardini said.

To learn more about the project, visit the website here.