Reinhardt University Theater welcomes “Oliver Twist” on Feb. 18. Based on the classic novel by Charles Dickens and adapted for the stage by playwright Neil Bartlett in 2004, the story follows the tragic life of an orphan, Oliver Twist. “The story is a little dark,” says Morgan Brooks, show director. “He’s an orphan going through terrible things until he finds happiness.”

Despite the story’s darkness, Brooks says the production has been a joy. “The actors incorporate genuine humor that I was not expecting them to find.” Seniors Laura Blankenship and Nini Hutcherson play two of the protagonists in the story – Mr. and Mrs. Bumble. “I’ve given them an opportunity to create their own material. They’re hilarious! I’m so excited for people to see what they’ve done. They are comic relief throughout the entire show. It’s fun to have the villains be just hilariously bad.”

In addition to humor, the audience will be treated to original music throughout the production. “This adaptation of ‘Oliver Twist’ was originally performed with music, but it doesn’t have to be performed that way,” says sophomore Charlie Rice, who worked alongside junior Brody Harlan to incorporate the music into the show. “Brody is the main one who composed the music, and I worked as music director.” Both students also play roles in the show.

“The actors have gone above and beyond anything I expected!” exclaims Brooks. They play all their own instruments. It’s fun to experience their versatility and the varied skills they showcase.”

The play is set in late 1830s London, true to the time period of Dickens’s novel, but the audience may notice a few modern touches. Brooks admits, “The costumes aren’t 100% historically accurate. Some modern pieces are thrown in. The audience will also notice things like a drum set on stage, which is not period-correct from 1837. It’s a nice mix of historical and contemporary.”

“We strive for an experience where the audience enjoys a troupe of actors delivering a great show rather trying to convince them that all things on stage are real,” says Rice. 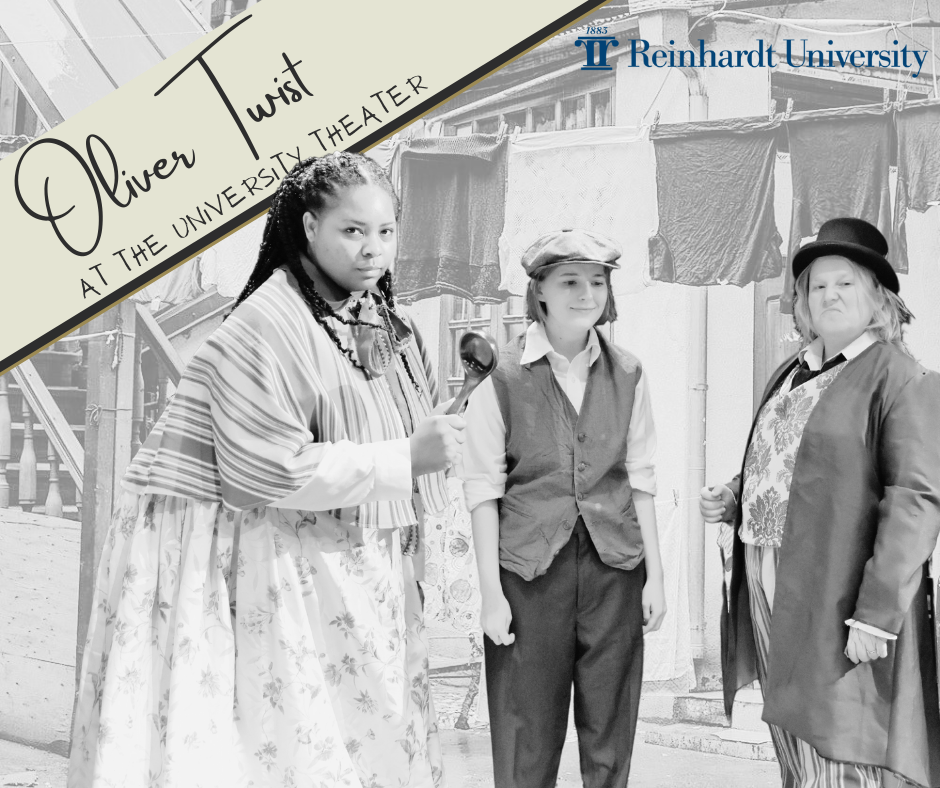 “It’s been such a fun experience to create a show like this after a long break with the pandemic. Although I’m the director,” says Brooks, “this show has been a unique, highly collaborative performance opportunity for the students. We have a script that’s already written, but then we add student composers and music directors who are able to develop something completely new– none of them have experienced that before.”

“Being a part of her (Brooks) vision has been very liberating and challenging at the same time,” says senior Sean Tormey, who plays the Artful Dodger and narrates the show. “We are trying different things for this play. With the addition of the music and way she has allowed us to develop our characters, this is one of the most creative shows I’ve ever experienced.”

You must see this show! Rice concludes, “We tell a very twisted version of little orphan Oliver, and although it’s a very dark story, we will have you laughing.”

Sophomore Sidney Scruggs, who plays the main character of Oliver, agrees and adds, “It has fight scenes, original music, and an incredibly talented cast, and it’s funny. Oh, and students get in free with their student ID!”

Tickets are $12.50 each for the public. Students are admitted free with their ID. To reserve tickets, contact the Falany Performing Arts Center box office at 770-720-9167or visit the ticketing website.