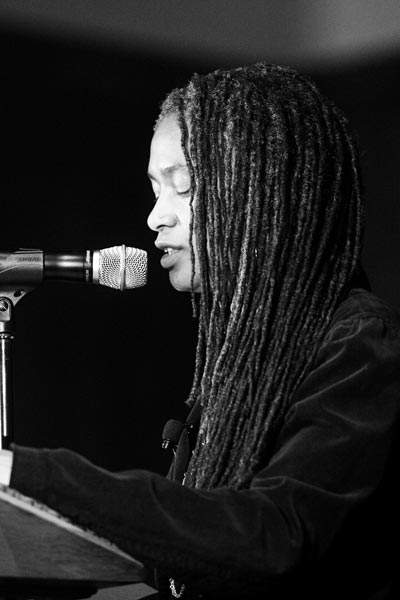 Sharan Strange, a native of Orangeburg, South Carolina, received the M.F.A. degree in writing at Sarah Lawrence College. She was a founding member of the Dark Room Collective and co-curator of its Dark Room Reading Series, which presented over 100 established and emerging writers, musicians, and visual artists of color to audiences in the Boston area from 1988-1994. For many years, she was also a contributing editor of Callaloo, the journal of African diaspora arts and letters. Currently, she teaches creative writing at Spelman College and serves as a community board member of Poetry Atlanta.

Her honors include the Barnard Women Poets Prize for her first collection of poems,Ash, which was selected by Sonia Sanchez and published by Beacon Press; the Rona Jaffe Foundation Writer’s Award; an Individual Artist Award from the D. C. Commission on the Arts; a Pushcart Prize nomination; and residencies at the Gell Writers’ Center, the MacDowell Colony, and Yaddo. She has served as Bruce McEver Visiting Chair in Poetry at the Georgia Institute of Technology, and faculty of the Center for the Contemplative Mind in Society Summer Session at Smith College. She has also been writer-in-residence at Fisk University, Bennington College, Wheaton College, the University of California at Davis, the California Institute of the Arts, the University of Tennessee-Chattanooga, the University of North Carolina at Wilmington, and other colleges and universities.

Her poems and essays have been published in journals and anthologies in the U.S. and abroad—including Angles of Ascent: A Norton Anthology of Contemporary African American Poetry, Best American Poetry, Callaloo, Furious Flower: African American Poetry from the Black Arts Movement to the Present, The Ringing Ear: Black Poets Lean South, Temba Tupu! Africana Women’s Self-Portrait, The American Poetry Review, Bittersweet: Contemporary Black Women’s Poetry (UK), Dance the Guns to Silence (UK), and Agenda (South Africa), among others. Her work has also appeared in exhibitions at the Whitney Museum and the Skylight Gallery in New York, the Institute of Contemporary Art in Boston, and the Spelman College Museum of Fine Art. Her poem, “Everyone Is a Mirror,” was commissioned for the exhibition catalogue for Black President: The Art and Legacy of Fela Anikulapo Kuti at the New Museum of Contemporary Art in New York.

Recently, her work has been included in Bearden’s Odyssey: An Anthology of PoemsResponding to the Art of Romare Bearden and Revise the Psalm: Work Celebrating the Writing of Gwendolyn Brooks; in the exhibition Let’s Play: Intuition, Imagination, and Black Creativity at the Pro Arts Gallery in Oakland; and, in concert with the American Modern Ensemble (with composer Robert Paterson). Her libretto for Yet Unheard (with composer Courtney Bryan), was commissioned by The Dream Unfinished Orchestra for its 2016 Sing Her Name concert to honor Sandra Bland, and had its chamber orchestra premiere at the 2017 Ojai Music Festival.