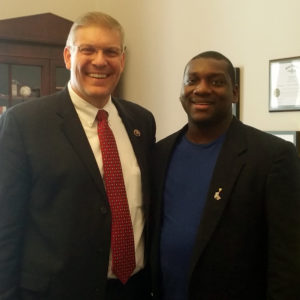 While an undergraduate student at Reinhardt, Jamie Palmer ’16 was selected as a delegate at the 2016 American Israel Public Affairs conference. He is pictured with U.S. Congressman Barry Loudermilk during that visit.

On a typical day during his undergraduate, Jamie Palmer ‘16 could be found spending time with friends in the Hasty Student Life Center.

“Reinhardt is my home. From the moment I first set foot on the campus I knew that this is where I belonged.”

The political science major was an involved student: an active member in Phi Beta Lambda, a voice for students as student body president on the Student Government Association and a founding father of Kappa Sigma Upsilon Alpha Chapter.

These experiences provided Palmer with vital skills for his position as Development Services Specialist for the city of Woodstock – a job he secured after completing an internship with the city.

“From the moment a project is approved by City Council, my job is to organize, coordinate and manage the project from the city side of things until the project is completed,” said Palmer.

Through his courses and involvement on campus, Palmer learned how to effectively communication, as well as strong organizational and leadership skills.

“Reinhardt has played a big role in me growing as a person and my ability to become a better leader and listener,” Palmer said.

Palmer continues to appreciate what his education has done for him as a person.

“Reinhardt allowed me to grow out of my shell and become a man. I do not know what I would do without the wonderful University that I call home.”