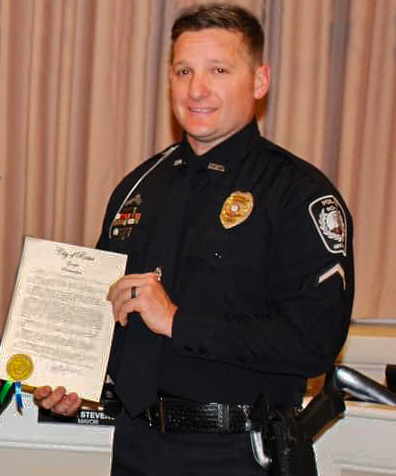 Kasmar joined the Rome City Police Department in 2016 not long after graduating from Reinhardt’s Police Academy in 2015. Following the Police Academy, Kasmar earned an Associate of Science in Criminal Justice at Reinhardt. Since then, in addition to being named Office of the Year twice, Kasmar has been Officer of the Month five times and received the Lifesaving Award in 2018.

During Kasmar’s award presentation at the Rome Commission meeting on February 28, Commissioner Bonny Askew illustrated why Kasmar was the recipient of this honor.  In February 2021, for example, Kasmar performed a welfare check and found a man in his home without food and in need of medical assistance. After assessing the man’s most immediate needs, Kasmar purchased groceries with his own money, and connected him for long-term assistance with Meals on Wheels. Kasmar is recognized as someone who routinely goes “above and beyond” in serving his community, and deeply cares about the welfare of others.

Kasmar attributes some of his success to a Reinhardt education. “Reinhardt helped me to recognize and build my competencies and to understand the importance of studying and research.  These skills are essential in my everyday life and enable me to perform thoughtfully and effectively. The resources I offer to people often come from my own research, and I extend the information to the Rome Police Department and our community. Education is critical to my success on the job in every way, from understanding and participating in the court system, effectively writing reports, and interacting with people.”

“I like to refer to Scott as a double eagle in that he graduated from the Reinhardt Police Academy and went on to earn a Reinhardt academic degree,” say Trey Drawdy, director of Reinhardt’s Public Safety Institute. “Scott is a true believer in going above and beyond the call of duty and is an asset to this noble profession. We are very proud of him and his accomplishments.”