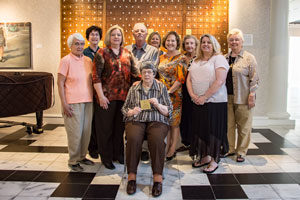 Opened almost 15 years ago, the Falany Performing Arts Center at Reinhardt University (FPAC) is at the heart of a thriving arts community in Cherokee.

Now, with a gift from an anonymous donor, the endowment for the FPAC has grown by $2,000, and Rachel Elizabeth Satterfield — longtime cashier at Reinhardt’s Gordy Dining Center, now retired — has been honored.

Satterfield, described by a Reinhardt staff member as “a friend to students who provided a welcoming smile and encouragement,” has forever been recognized with a chair dedicated in her honor.

“The FPAC is a community treasure focused on providing first-rate performances in the Cherokee County community and beyond,” said Jessica Akers, director of the Falany Performing Arts Center. “With a mission to keep arts education alive not only on the collegiate level but playing a part in K-12 education, supporting the FPAC endowment helps keep live performances on stage for all to see. We are extremely grateful for those who invest in this fabulous facility and our growing program offerings.”

Reinhardt President Dr. Kina S. Mallard said it’s a gift like this one that truly honors someone and provides a long-lasting benefit to others.

“Ms. Satterfield always made sure she gave each student, staff and faculty member a big hello and smile as they entered the Gordy Dining Hall for their meals,” Dr. Mallard said. “We are honored that her friend chose to honor Ms. Satterfield with a gift to the University that will provide for the ongoing expenses of such a treasured facility here on our campus in Waleska.”

The first chair dedication at the FPAC was in 2005, and currently 31 of the 350 seats in the concert hall are dedicated to an individual. With the one-time gift, that chair is held for the person it is named when ticket sales are opened to FPAC Patrons. If the seat is not purchased for a particular show, it is opened up for general admission seating.

For more information about the Falany Performing Arts Center, visit FPAC.Reinhardt.edu. Or, to make a gift to the FPAC endowment or to dedicate a seat in the concert hall, contact Reinhardt’s Office of Advancement at (770) 720-5621.