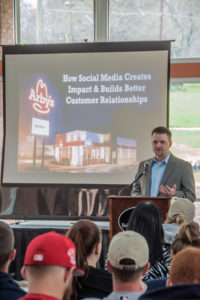 Josh Martin, senior director of digital and social media for Arby’s, spoke to a standing-room-only crowd at Reinhardt University March 22.

Social/digital marketing has the power to transforms organizations, and it’s important to deploy it strategically and responsibly.

That was the message from Josh Martin, senior director for digital and social media at Arby’s, during the March 22 Community Gathering held at Reinhardt University.

Martin was named one of the top 10 social media managers in the food industry following an innocuous tweet during the 2014 GRAMMYs.

Sitting in his Atlanta home watching the awards show, he opened his laptop to peruse – what professionals like Martin call “social listening” – what was happening on Arby’s social media channels.

“Pharrell (Williams) was wearing this hat that looked like our logo and people were comparing it to it,” Martin said. “I thought it was a good time to get in on the conversation.”

The tweet heard around the world, as he called it, was simply, “Hey @Pharrell, can we have our hat back? #GRAMMYs.”

The tweet garnered more followers, favorites and retweets for the food brand than it ever had seen before. Arby’s, Martin confessed, had long been ridiculed for its “behind the times” status when it came to social media.

In an effort to update its status, Arby’s brought Martin on seven years ago to get the department started. As a one-man team in an environment where people did not understand the importance of utilizing social media to market the brand and reach the younger generations, Martin said he had to explain the value of the tool to break through.

He held lunch and learns and provided analytics to which his superiors could relate.

He later would find himself reporting to the executives at Arby’s that one innocuous tweet sent from his Atlanta living room garnered so much press – including the TODAY Show and Live! with Kelly and Michael – that it was worth more than $30 million in paid advertising.

Several weeks later, Pharrell tweeted that he was auctioning off the hat eBay with the money going to his charity, From One Hand to Another. Martin told his bosses they needed to “ride the wave” as long as possible. So the company ponied up $44,100 to purchase the hat, which later would be on display at the Newseum in Washington, D.C. It’s now housed at Arby’s headquarters in downtown Atlanta.

“Each avenue has its own purpose,” Martin said.

He also said it’s important for those in charge of social media to have the freedom and flexibility to market the brand and that it is helpful for a social media guide to be distributed to those who hold the keys to the accounts.

Arby’s has a 50-page ever-evolving document that is distributed to franchisees, so they know what the brand is looking for in the use of social media.

Following his one-hour presentation and Q&A during the Community Gathering, he met with students and later staff and faculty to discuss uses of social media. For students, he focused on how social media can help or hurt them in finding and job. With faculty and staff, he talked about strategies in social media use and fielded questions about the different platforms and how to properly record social media analytics.

Martin made himself available for questions from each group in an interactive discussion because he knows the value of social media when a good strategy is deployed and is responsibly put into action.

His bosses may still be looking for that tweet that yielded millions in free advertising, and that is one of the many reasons Martin says its important social media users for business need to stay on their toes. They never know when that “tweet heard around the world” will hit their accounts.