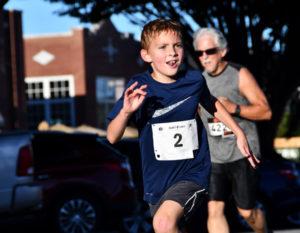 “The 5K is such a great event. The smiles and excitement of those participating really showed us how much Reinhardt University means to this community,” said Dale Morrissey, Senior Director of Constituent Engagement. “We truly appreciate our wonderful sponsors and participants for all they did for this year’s event.”

Several teams formed to participate in the race, including the Universal Alloy team, who registered almost 30 runners, earning the coveted team trophy. Inside the University, there is an annual competition in which the department with the most participants gets to display the “tennis shoe” trophy for the next year. With the School of Performing Arts having the most participants this year, the trophy will be found in Falany Performing Arts Center until next year’s race.

The top three race finishers in the men’s division in order are: Warren Taylor, Harley Pyron and Zachary Taylor. Ashton Sutton, Suzanne Johnson and Chloe Cobbett were the top three female finishers. Winners of divisions are posted by age at classicraceservices.com.

“It always amazes me how many people have supported Reinhardt as a part of the Cherokee Scholars program – what was known until this year as ‘ADay for Reinhardt,’ said Tim Norton, vice president for advancement and marketing. “This year we will surpass $5 million raised since 1988, all of which will be given to students from Cherokee County studying at Reinhardt. To the many who have given in the past, as well as all who will support RU this year, we say a hearty thank you for your generous support.”

For information or to give to the Cherokee Scholars program, click here.