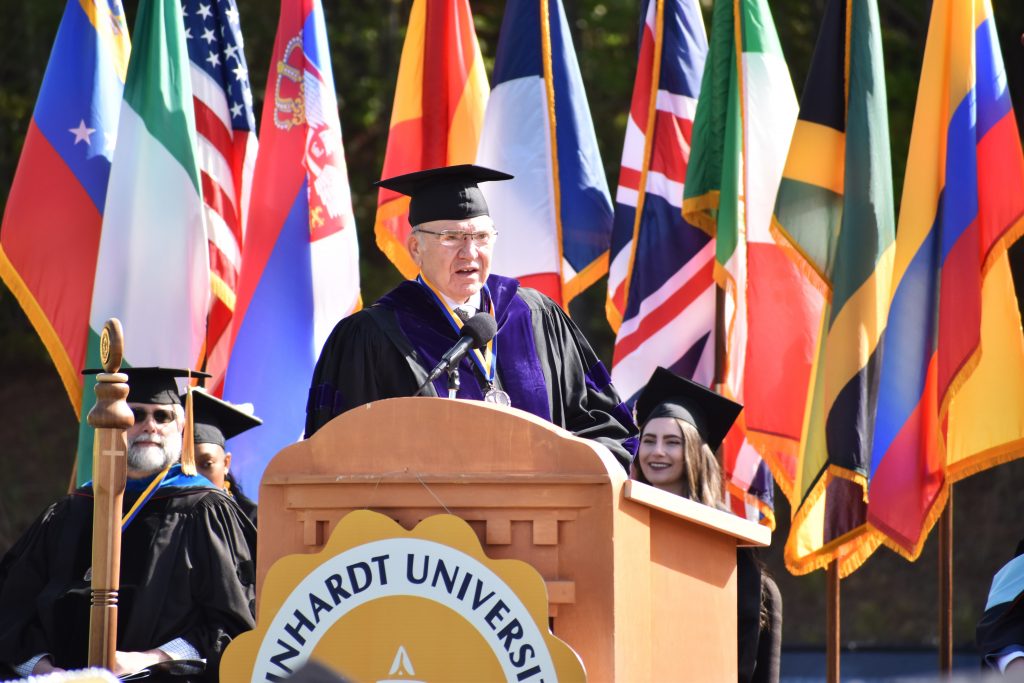 Reinhardt University bestows C. Ken White with an Honorary Doctorate in Humane Letters during the 134th Commencement ceremony on May 7. This honor recognizes Mr. White’s extraordinary kindness, professional achievements, service to the community and generosity to Reinhardt University.

Mr. White graduated from Reinhardt College in 1961. He has since enjoyed a successful and varied career, first as an accountant, and then as an entrepreneur, launching two carpet manufacturing businesses.  As an innovative community leader, Mr. White has served on the Board of three banks, two of which were start-ups.  He has also been a member of numerous non-profit boards, ensuring that our communities thrive through education, the arts, and needed social safety nets.  Today, he continues to be a minority owner in ventures across several industries.

When notified that the faculty nominated and voted unanimously to honor him with a Doctorate of Humane Letters, Mr. White said, “being nominated by Reinhardt’s faculty is a cherished honor and very meaningful to me.  I am elated and humbled by their recognition and trust in me to play such a significant role at Reinhardt, a role that I respect and hold dear.”

In 1983, James Brown— the man who donated gifts to build the James and Sis Brown Gymnasium— invited Ken White to serve on the Board of Trustees at Reinhardt.  Now in his thirty-eighth year as a member and his third year as Chairman of Reinhardt’s Board, Mr. White says that service to his alma mater ignited his philanthropic interests in creating a Reinhardt campus that served all students, where all students thrive.

During his time on Reinhardt’s Board, Mr. White has donated over two million dollars to theUniversity, significant funding for the institution that also supported, in part, the renovation of the Cauble School of Nursing & Health Sciences in Jasper.

When asked why he gives, Chairman White said, “I want to help make Reinhardt a premier private university that is known for its challenging academic programs and its support of students who can learn in a positive, character-building environment.”

On the football field that bears his name, President Mark Roberts thanked C. Ken White for all he has done for the University and bestowed upon him the Honorary Doctorate of Humane Letters.