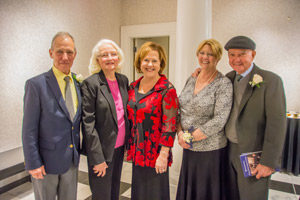 Reinhardt University’s Falany Performing Arts Center was feted in style on Friday, Feb. 10, in celebration of its 15th anniversary, including the announcement of the naming of the concert hall, “Flint Hall” in honor of donors Bea and Austin Flint.

Almost 300 patrons and friends joined to hear some of Reinhardt’s best and brightest faculty, students and alumni perform various works including the opening act, How Great Thou Art, performed by former President Floyd and Fay Falany’s daughter, Cortney Massoud, and granddaughter-in-law, Isabella Wilbanks.

“It was a fantastic evening with wonderful thank yous to the Flint and Falany families,” said FPAC Director Jessica Akers. “The performances of our faculty and students were outstanding.”

At the event, President Emeritus Falany and his wife, Fay, were honored along with the Flints. For their continued support of both Reinhardt University and the Falany Performing Arts Center, President Kina S. Mallard and Tim Norton, vice president for advancement and marketing, presented Dr. and Mrs. Falany with a framed print of the performing arts center that bears their name sitting atop the hill overlooking Lake Mullenix.

The Flints were honored for their generous $1 million gift to the University for capital projects, including the new theater building. In acknowledgement of their financial dedication to the University, the 350-seat concert hall in the FPAC now is named Flint Hall.

In addition to the plaque installed outside Flint Hall, Mallard and Norton presented Dr. and Mrs. Flint with a framed print of the concert hall that bears their name.

“Reinhardt University and all of us who appreciate wonderful music are deeply indebted to Dr. and Mrs. Flint for their longtime support of the arts, especially here at Reinhardt,” said Norton. “The Flints recent gift is already at work as we build a new theater, and as music students will soon be the recipients of support from the Bea and Austin Flint Endowed Scholarship for music students.”

Retiring piano professor, Susan Naylor, capped off the evening’s performers with Nocturne in C Minor, Op. 48, No. 1 by Chopin, receiving a standing ovation.

Reinhardt Board of Trustees Chairman, Billy Hasty, concluded the evening with a toast to “15 more years of great performances at the Falany,” and in “grateful appreciation of the Flints for their most generous gift” to the University.