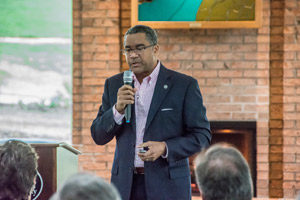 Tony Harrison, a Canton resident and one of the first franchisees of Cousins Maine Lobster, spoke to students, faculty and staff at the Feb. 22 Community Gathering.

A strong work ethic, prior planning and the acknowledgement of the possibility of failure are key principles to owning a successful business.

Harrison, among the first franchisees of Cousins Maine Lobster – a company that has boomed since its appearance on ABC’s “Shark Tank,” suggested that not everyone is cut out to own and operate their own business.

“It’s very challenging,” Harrison said, adding the political climate of the country and other similar factors are not what dictates if a business is successful. “That’s something that you control.”

Harrison told of his background, growing up as a “military brat” since his father was in the Army. “I moved about 12 times by the time I was 13 years old,” he said, adding it was a great experience because he was able to gain a unique perspective on the world and on people in general.

Born in New Jersey, he mainly grew up in the Virginia area, later finding himself in Florida as a college student at Florida A&M University.

“I was predominately in all white schools growing up, and when I went to college, here I was immersed in predominately black university and culture. Yet another experience for me.”

Harrison interjected into his program twice, specifically speaking to students as he encouraged them to get the most out of their college experience. He told them college is one of the best times of their lives and it’s important for them to be involved and participate in service activities.

He told the almost 100 people in attendance that the majority of them would not start a business however they likely would at least consider it once in their lifetime.

The top of the list was to find a different career path or use it as a way to reinvent themselves. Other reasons included financial independence, the work-life balance, job security or pursuing a passion.

He stressed the importance of starting a business the right way and Harrison has learned from experience.

His career has included a 17-year tenure with Proctor & Gamble, a job at which he did well and earned well. But something was missing; he was not fulfilled.

He then became president and CEO of Tohar Industries and later led Bonus Building Care. He sold Bonus Building Care in 2012, and after seeing Cousins Maine Lobster on Shark Tank, Harrison took a plunge and launched the Atlanta franchise of the food truck business.

He said he has seen success and failure, and being cognizant about what is expected and how much time and money owning a business takes is imperative.

Harrison called the Iceberg Illusion a great metaphor for business – the large iceberg above the water’s surface is the success, the fancy cars, nice house and money, but the large block of ice below the surface is the hard work, failure, dedication, sacrifice and time that no one sees.

He said budding entrepreneurs need to be ready for the unforeseen – which includes doubling the capital one thinks will be needed.

“There are always things in business that will happen that are not expected,” Harrison said.

Being underfunded is one of the main causes of a failing business. Others include being top heavy or relying too much in just a few clients, poor leadership/bad management, starting a business for the wrong reason and a lack of upfront planning.

“There is no better time that right now to start a business,” Harrison said, adding it’s important to be aware of the political climate but to not get wrapped up in the rhetoric.

As part of the overall program celebrating Black History Month, student Adrienne Lawrence read Maya Angelou’s poem, “Why the Caged Bird Sings.” Music selections sung by the School of Performing Arts choirs sang “Lift Every Voice” and “We Shall Overcome.”

The next Community Gathering will be held March 22 at 1 p.m. in the Bannister Glasshouse and will feature Josh Martin, an award-winning social media specialist and senior director of digital and social media for Arby’s.