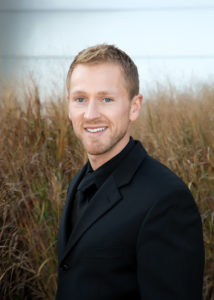 Daniel Kirk will join the School of Performing Arts as assistant professor of music and director of instrumental activities. Kirk said he likes the fact that Reinhardt offers a quaint and engaging atmosphere in which to teach the art of music.

“I was attracted to the sense of community and family among students and faculty at Reinhardt,” he said. “I believe the opportunity to provide students with a world-class musical experience all while connecting in the context of a smaller student community exists at Reinhardt.”

Kirk will be directing the Symphonic Winds, and will teach courses in beginning and advanced instrumental conducting.

“My goal is to engage students intellectually, musically and personally in the process of creating music. I want to expand their knowledge of our subject material, enhance their individual musicianship and create meaningful personal connections between them and our shared music,” he said.

“We will honor the legacy of excellent bands at Reinhardt while charting a path toward musical growth and world-class experiences. Our Reinhardt ensembles will present the highest quality of literature, programs based in standard core repertoire enhance individual musicianship and cultivate ensemble skills. I want each of my students to be prepared to achieve success in their musical futures.”

Kirk is relocating from Michigan State University, where he currently is a doctoral conducting assistant and where he recently completed studies with mentor, Dr. Kevin Sedatole. He defended his dissertation in February and his Doctor of Musical Arts in Wind Conducting from MSU will be conferred in May. Kirk earned his Master of Music in Wind Conducting from Northwestern University in 2015 and his B.S.E. in Instrumental Music Education, Piano Performance Emphasis, in Fall 2007.

Prior to his graduate work, Kirk served as the director of bands at Blue Valley West High School in Overland Park, Kansas. His teaching responsibilities included the Symphonic Winds Ensemble, Jazz Ensemble, Honors Music Theory and Music Theory. Kirk administered and coordinated all aspects of the Red and Silver Brigade Marching Band, and he assisted with Concert Band and Freshmen Band.

Traveling across the country each summer, he serves as a conducting faculty member for high school drum major academies; he has also served as a faculty member at Music for All’s annual Summer Symposium at Ball State University. Kirk judges winter guards each year as a member of the Michigan and Mid-Continent Judging Associations. He also has toured with the Madison Scouts Drum and Bugle Corps, serving in the percussion section in 2004 and in the color guard in 2005. In addition, Kirk served as the front ensemble coordinator at Lee’s Summit North High School. Marching band adjudication and design consultation have been key areas in his professional experiences.