After spending more than a decade teaching and leading Reinhardt’s School of Arts & Humanities, Dr. Wayne Glowka will retire at the close of the spring semester.

With a doctorate in English from the University of Delaware, Glowka began his career at Georgia State College & University where he served for 27 years. He joined Reinhardt in July 2007. Glowka spent a year as the coordinator for the English program before transitioning to the dean of the School of Arts & Humanities. 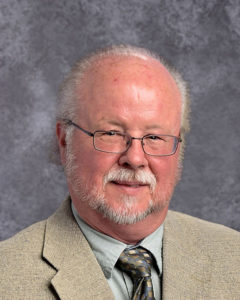 “In administration, I spent my first years here building new programs in World Languages and Cultures, Theater and Creative Writing,” said Glowka. “In the last few years, my attention has turned to looking for ways for programs to be more efficient.”

Glowka spent the early years of his career investing much time and energy into scholarship in medieval studies and lexicography. His time at Reinhardt enabled him to focus on creative ventures.

“In my Reinhardt years, I turned to creative projects, writing an epic on the Texas Revolution, retelling medieval romances with a twist and learning how to write plays. In my teaching, I think I finally learned how to simplify instruction by breaking the process into parts.”

Over the course of his 30 years in higher education, Glowka worked 12 months a year and had a hand in many areas, from the innerworkings of the University to growing his department in unique ways. His responsibilities as a dean often entailed essential tasks such as student registration, but other times his role included organizing hootenannies and 24-hour play festivals.

“He has led the School of Arts & Humanities with grace and style, supporting his faculty in their teaching and scholarship throughout,” said Dr. Mark Roberts, acting president, provost and executive vice president. “Additionally, Professor Glowka gladly joined my effort to publish the James Dickey Review by volunteering to serve as its managing editor. With Dr. Glowka’s keen editorial eye, the JDR became a high-caliber literary journal. He also has brought joy to the campus with his exuberant creative spirit— whether that was making students write and perform short plays in 24-hours or playing— or making— banjos and guitars.”

Throughout his time at Reinhardt, Glowka received several writing opportunities, including the Quality Enhancement Plan (QEP) for Southern Association of Colleges and Schools Commission on Colleges (SACS-COC).

“I never made writing a Quality Enhancement Plan for SACS-COC a career goal, but I found myself as the author of the current QEP. I imagine that I will one day recover from that experience,” quipped Glowka.

One genre of writing Glowka did enjoy exploring during his career was playwrighting. It became one of his favorite courses to teach, along with his Shakespeare course.

“With more than half of my time devoted to administrative chores, I generally opted to teach mostly 100-level classes. But a delight of my old age has been teaching a course in playwriting. It has been wonderful to teach a subject that the students truly love—rarely does anyone tell me how fun research paper writing has been.”

One of his students, interdisciplinary studies major Jamie Rhinehart ’20, found his love for theatre translates well into his teaching style.

“Dr. Glowka is a fascinating person to learn from. In the classroom, he taught with animation and enthusiasm that rivaled some of the best theatrical performers with his interpretations of the literary characters we studied while outside the classroom. He always had an interesting story about his experiences, travels or hobbies to share. It would be hard to find someone with as many varied and interesting interests as Dr. Glowka.”

“When Wayne Glowka joined Reinhardt, the University became better as he worked among our ranks; we lose a bit of luster as he makes his exit,” said Roberts.

While he will leave with many memories of his days teaching English and leading the Arts & Humanities department in Waleska, one memory Glowka will never forget is watching the late Kevin Crawford perform the renditions he wrote of Shakespearean classics.

“A moment of glory for me was seeing one of my plays produced in Flint Hall at a 24-hour play festival. Before his untimely death, the great Shakespearean actor Kevin Crawford played Othello and Hamlet in two of my parodies of Shakespeare’s great tragedies. His last performance before passing was in my joke version of ‘Hamlet.’ I’ll never forget him beating a dog-chew plastic steak on a table saying Hamlet’s famous words, ‘O that this too too solid flesh would melt.’”