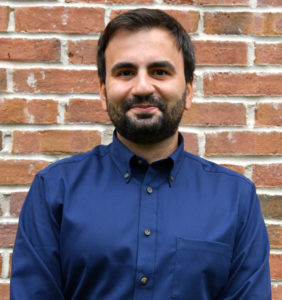 Dr. Efe Sevin and University of Fribourg professor Diana Ingenhoff began collecting data for their public diplomacy research in September 2016. Two years later that research has been published in the International Journal of Communication.

Sevin and Ingenhoff presented their findings in “Public Diplomacy on Social Media: Analyzing Networks and Content.” The two were familiar with each other’s work upon meeting, as Sevin participated in a fellowship in Switzerland at the University of Fribourg.

“Reinhardt faculty are excellent in the classroom.  In part, their excellence as teachers derives from the scholarship they produce and the disciplinary activities they perform

while they are not in class or working with their students,” said Provost Mark Roberts. “Because of this expectation to engage deeply in their chosen discipline, Reinhardt professors, like Dr. Sevin, bring the cutting-edge knowledge to Reinhardt students who can then apply it in the world.”

Sevin described public diplomacy as “a process through which countries try to ‘sell’ their images to international audiences.” He is interested in how to measure and assess the communication process, particularly online, and researched the topic through Twitter usage in Australia, Belgium, Switzerland and New Zealand.

“Public diplomacy is not only about ‘messages,’ it is also about relations,” said Sevin. “Twitter presents a great opportunity to disseminate content and to establish relations with other users.”

While Ingenhoff focused on creating a measurement framework for comparative purposes, Sevin worked to establish a mechanism for the causes between public diplomacy and policy outcomes.

“Combining our expertise was a great opportunity to actually talk about public diplomacy and its implications from a comparative perspective,” said Sevin.

The research done on public diplomacy may be more far-reaching than one may assume—Ingenhoff and Sevin proposed an accountability tool assessing how well tax money is spent on this state-driven process. It also affects social media users, proving that once content is shared, especially across countries, it has the ability to travel to vast multitudes. It also raises the interesting point that “nobody owns a country’s image.”

After presenting their initial findings at the International Communication Association’s annual conference last May in San Diego, California, Ingenhoff and Sevin completed their research in December 2017. Their work can be read online at the journal’s website, ijjoc.org.