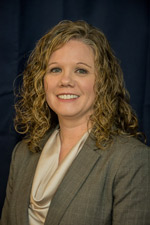 Dr. Karen Owen, Reinhardt University assistant professor of political science and director of the MPA program, is making great contributions to political science with her new book that examines the role of mentorship in helping women advance in politics.

“Women Officeholders and the Role Models Who Pioneered the Way,” published by Lexington Books – The Rowman & Littlefield Publishing Group, combines three decades of electoral data and analyzes why American women run for political offices and how their predecessors influenced them.

Owen said the idea for the book came from her experience working on Capitol Hill.

“Dr. Owen’s work convincingly argues, through a variety of research methodologies and data, that, indeed, women who hold public office serve as not only role models for other women but actively mentor and motivate them to serve the public good,” said Dr. Mark Roberts, Reinhardt University Provost. “Dr. Owen’s book is yet another piece of tangible evidence that Reinhardt University’s faculty are among the best and brightest serving in higher education.”

“The stories of women I interviewed for this book were remarkable,” she said of the 10 Congresswomen and 55 state senators/representatives she interviewed. They were encouraging and “eye opening.”

“I did not realize how much discrimination some of them felt and had to overcome and how much grit they had to employ to be above double standards in politics that were at play,” Owen continued.

The book is geared toward academic classrooms, specifically those related to women in politics, and its purpose is to analyze the reason women run for public office.

“It was written with intentions to share the research in collegiate classrooms, including courses in upper level political science, gender studies and other graduate classes. Students will learn a lot about the role of women in politics from the book. I would like to see it used in the collegiate environment and in every day discussions so we can explore women’s roles in politics,” Owen said. “But anyone interested in women in politics and the encouragement of role models will find the book interesting.”

Owen said she hopes other collegiate professors will share her years of research with their students like she does with hers at Reinhardt University.

“Dr. Owen’s devotion to her scholarship is equaled only by her devotion to her students, whether first-year students or graduate students. But the partnership between professors and students is exactly what Reinhardt University does best,” Roberts said. “And Dr. Owen is one of our shining role models for successful women in academia.”

“Women Officeholders and the Role Models Who Pioneered the Way” is available on Amazon and for Kindle, and on Google Books. It also is available through Rowman & Littlefield.

Dr. Owen is a gender politics and American institutions scholars. She has published articles on congressional elections, state legislative partisanship and women serving within local levels of government and trial courts. She is a recipient of Reinhardt University’s Jane England Teaching Excellence Award (2016).

She is married to Cliff Owen, and they have two children, Clayton, 7, and Cora, 3.