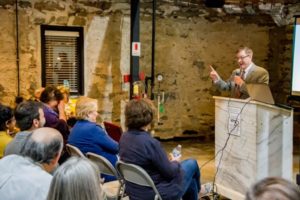 Reinhardt professor Dr. Ken Wheeler presented his sabbatical research, “Stranger than you Knew: Waleska Universalists and their Influence on the South,” to a standing-room-only crowd at the Cherokee County Historical Society’s Feb. 20 meeting.

Wheeler gave a fascinating speech about a time when Waleska was spelled Wahluskie and when the town diverged from the religious mainstream.

“I have a whole theory about what I call ‘the Waleska we forgot,’” said Wheeler, professor of history. “It’s the idea that Waleska is actually a strange place in a number of ways in the late 19th Century. The fact that Reinhardt was founded there—there’s something going on there that does make it different from a lot of other places.”

Wheeler has focused his research on the regions surrounding Reinhardt University. He teaches a course on local history and culture, and he devoted his sabbatical last year to studying the Etowah Valley. His presentation, “Stranger than you Knew: Waleska Universalists and their Influence on the South” highlighted one Waleska family, the Stroups.

In the 1850s, the formative years leading up to Reinhardt’s founding, the Stroup family settled in Waleska. In a landscape dominated by Baptists and Methodists, they were Universalists—members of a denomination distinct for its belief in universal salvation. The Stroups, seemingly unfazed by the dominant culture, founded a Universalist church in Waleska, produced four Universalist ministers and traveled the South on horse and buggy preaching sermons.

The Stroups and their extended family erected a brick and mortar operation—the Salem Universalist Church, which hosted the Universalist State Convention of 1874.

“Of the 26 attendees, most were family members. Basically, the state convention was a family reunion,” Wheeler said.

Local Baptists regularly engaged the Universalists in public theological debates, an unlikely interaction characterizing the strangeness that had become Waleska’s reality. Waleska, Wheeler said, has long been a site of debate, questioning and intellectual growth prompted by such occurrences.

“I would argue that this Universalist church is part of what I would call ‘weird Waleska,’” said Wheeler. “I’m interested in kind of fleshing that out a little more.”

Wheeler’s forthcoming book, “Modern Cronies: Industrialization in the Cherokee Country from Gold Rush to Convict Labor,” will delve deeper into Etowah Valley history, and a version of his presentation has been accepted for publication by the “Journal of Unitarian Universalist History.”