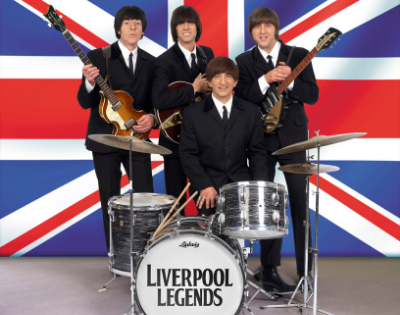 LIVERPOOL LEGENDS are four talented musicians and actors who were hand-picked by Louise Harrison – sister of the late George Harrison of The Beatles – to recreate the band that changed the face of music forever!

Louise’s involvement with LIVERPOOL LEGENDS makes them the only band in the world with a close, direct biological link to the original Fab Four! “Liverpool Legends present the very best portrayal of The Beatles since the only four guys to play The Beatles were John, Paul, George and Ringo!” says Harrison.

Liverpool Legends perform songs spanning the entire career of The Beatles and on through the solo years. With precise attention to every musical detail, along with costume changes, vintage instruments and special effects, Liverpool Legends will make you feel like you are watching the real thing! Together, these four lads will bring “A Complete Beatles Experience.”