Dr. Daniel Kirk’s life has revolved around the music world, with student-involved bands being his central focus.

Kirk’s passion and expertise for music brings his students closer to the pieces they play and teaches them to appreciate the process of evolving as young musicians. 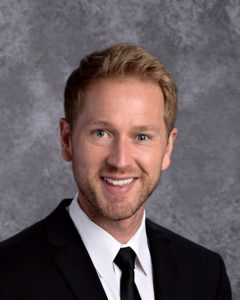 “I want my students to leave our shared time with a deeper understanding of music, as well as enduring love for the process that is our work and improvement.”

Kirk, director of instrumental activities and assistant professor of music, received his Master of Music in conducting at Northwestern University and credits Dr. Mallory Thompson, professor in music and director of bands, for shaping him into the teacher and conductor he is today.

“She guided, shaped and led my renewed artistic path as a conductor and teacher.”

Before coming to Reinhardt in Spring 2017, Kirk taught in clinics and served as an honorary conductor for high school and university bands around the nation. Kirk plans to serve as a guest conductor and participate in clinician engagements at the University of Alabama, Murray State University, the University of North Carolina at Wilmington and both the South Carolina and Georgia Music Educators Associations over the next two years.

Kirk has always attempted to be a step ahead of others in his field, bringing innovation and new technologies into his work as a conductor. In October 2011, just 18 months after the first iPad was released, he incorporated it into a rehearsal at a high school developmental workshop in Kansas. With integrations of new methods alongside his vast success in conducting, Kirk has received multiple awards including the Kansas Bandmasters Association’s “Most outstanding Young Band Director” in February of 2013.

With a decade of experience, Kirk learned what it takes to put a good show together and wants people who aren’t musicians to understand the true depth of what goes on behind the scenes before the final product is performed.

“What musicians do takes such preparation and investment of time and energy. It’s rare to ‘throw things together’ for events or performances. Our work takes time, planning, research, mindfulness and commitment.”

During his free time, Kirk loves working in the yard, spending time at the gym, playing with his two basset hounds, reading, enjoying laughs, traveling and making memories with his partner.