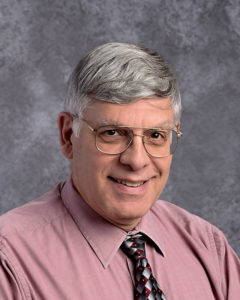 Fortunato first began his time at Reinhardt in January 2017, and quickly transitioned from an adjunct professor to a full-time faculty member the following semester. While he enjoys all the courses he teaches, he particularly enjoys the challenges of organic chemistry.

“It is one of the most difficult chemistry courses in most institutions, and by far the most difficult one we offer at Reinhardt,” said Fortunato. “What makes it so challenging is that there is a ‘mountain of material’ that I and the students have to keep straight in order to master this topic. Since many of our students want to go on to allied health careers, being able to assimilate and recall vast amounts of information is a valuable skill to master.”

While Fortunato has now taught organic chemistry 17 times, he still reviews the material in order to develop better teaching methods. Since starting graduate school, Fortunato has always intended to earn his Ph.D. and become a professor. However, he said 25 years of industry work “sidetracked” his goal.

Throughout the time spent in his industry, Fortunato worked in a variety of technology areas, where he found each job change as a way to encounter new challenges and opportunities to problem solve.

Fortunato’s position working with NASA engineers proved one of his most challenging projects, where he worked to develop life support hardware for the space station. In this role, he learned how to solve difficult problems and took those techniques on to future projects for other companies.

“Once I left industry (work), I took on perhaps the most challenging role, that of a university professor, helping to shape the next generation of scientists, engineers and medical professionals,” said Fortunato. “Reinhardt is the second university I have worked for, and I find my role more challenging with every incoming class of students.”

Through his chemistry courses, Fortunato aims to prepare his students for their next phase of life, using his years of experience to show them how to use basic knowledge in solving intricate problems. Fortunato focuses less on his students memorizing material and stresses the importance of problem solving.

“I would like my students to have faith in themselves so they can be successful, even in difficult circumstances. As I tell them, ‘I’ll tell you when it’s time to panic, and it’s not time to panic yet.’”

Fortunato learned just how “exciting” chemistry could be, when on his first day in organic chemistry lab during his sophomore year of college, his impatience caused the chemical reaction of his first experiment of the semester to end in flames. His professor’s response as he watched: “Isn’t chemistry exciting?”