Dr. Jonathan Good holds a love and passion for history that is evident in all areas of his life. Good spends a majority of his time, at work or during his free time, doing something that involves history one way or another.

“Everything has a past, and a mark of an educated person is to know that past, to know how we got here,” said Good. “As Cicero said, ‘Not to know what took place before you were born is to remain forever a child.’” 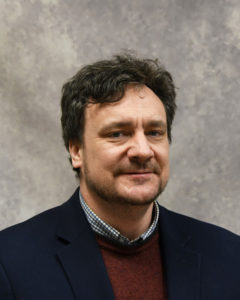 At Reinhardt, Good has been teaching various history courses since 2004. One of his favorites to teach is the first half of Western Civilization sequence because he feels “it never grows old.”

He has spent most of his time studying the Medieval ages with his favorite historical event being the Lancastrian Revolution of 1399.

“I always enjoy reading about the Lancastrian Revolution of 1399. It was a coup in which King Richard II of England was deposed by which his cousin Henry of Lancaster, who ruled as Henry IV and who founded the Lancastrian dynasty,” said Good. "No one was a hero in this sordid affair, but Henry was certainly more politically astute than Richard, illustrating an essential ingredient for medieval kingship.”

Since coming to Reinhardt, Good has reviewed and presented on many of his academic publications, including an article titled “What Can You Do With a Liberal Arts Degree? Almost Anything You Want,” published in Canton Family Life in July 2019. He also presented on “Medievalism and the Gaelic Revival,” at the 34th Annual Conference of International Society for the Study of Medievalism, which was presented at Georgia Institute of Technology in September 2019.

Traveling has become incorporated into Good’s Reinhardt experience. In 2017, he was granted sabbatical so he could travel to the Middle East. There he traveled to Turkey, Israel and Egypt. He traveled with Reinhardt on the study abroad trip to Ireland in 2018 and to China on a faculty development seminar.

Throughout his 16 years at the University, Good served in several history ventures outside the classroom. Good founded Reinhardt’s chapter of Phi Alpha Theta, the history honors society, and he also spent time as the faculty advisor for the history program. He was also the coordinator of the history program from 2013-2017.

Good has enjoyed working within the Reinhardt community as he continues to connect with students and further his knowledge of his field.

“I have really enjoyed my time at Reinhardt. It has allowed me to hone my craft and contribute to my field,” said Good. “I love working with students, love their enthusiasm and energy. Reinhardt is a community where we know and care about each other.”

When he’s not teaching, he enjoys reading and blogging about history. He contributes to the “First Floor Tarpley” blog run by Reinhardt’s history department, where he records his findings from research and travel.