The legendary guitar player, Jimi Hendrix, once said, “Music doesn’t lie. If there’s something to be changed in this world, then it can only happen through music.” Dr. Matthew Anderson hopes to promote the importance of music, one guitar lesson at a time.

Anderson began teaching at Reinhardt University, as an adjunct professor, in 2007, but with an increase in his class load, was promoted to assistant professor in 2012. Three years after his promotion, he was appointed to the tenure-track. He currently serves as the director of the Reinhardt Honors Guitar Orchestra and the Festival Music Program Coordinator. 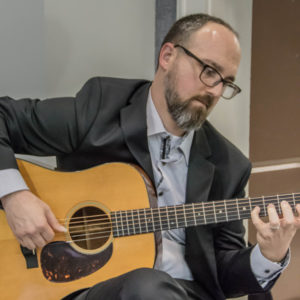 Anderson’s instrument of choice is and has always been the guitar; in fact, that instrument alone is what inspired him to pursue a career in music.

“I started playing guitar around age 12. At first, it was Rock, but I soon fell in love with all things Metal. After some time, my dad noticed how serious I was about guitar, so he let me raid his record collection. Through this treasure trove I was introduced to an incredible variety of styles and artists: Captain Beefheart, Frank Zappa, James Taylor, Chet Atkins, Creedence Clearwater Revival, Doc Watson and many others,” said Anderson. “My entire education and career goes back to that fateful day when my dad said, ‘feel free to rummage through my records; just don’t scratch anything and put stuff back when you’re done.’”

Once in high school, Anderson lacked resources to take guitar lessons. Through Guitar Methods, he shows students how to teach guitar, an important attribute in the music world that Anderson believes offers a place for young musicians in middle and high school with musical ability and interest who don’t find a home in the traditional band, orchestra or chorus route.

“I was one of those kids in a high school with no guitar offerings,” Anderson said. “It is one of the most popular instruments on the planet, and I like to play some small part in preparing future educators to be able to say, ‘actually, yes, I can teach guitar too.’”

The assistant professor of music is able to combine his love for Rock and his passion for the guitar when teaching courses like History of Rock and Roll.

Anderson feels a common misconception about teaching and studying music is the tendency for most to view it as a hobby rather than a profession.

“Studying and teaching music has an artistic side, but it also has a very physical side. Training for an instrument has many of the same concepts and approaches as athletics - minus the weightlifting. For every minute you see someone perform, there were hours spent in the practice room focusing on the most particular of details.”

Outside of the classroom, Anderson enjoys practicing cinematography and videography to create promotional videos for his friends, his own guitar duo, Athens Guitar Duo, and for himself as a soloist.

“It has been fun exploring elements of lighting, shooting styles and techniques, and recording and editing techniques. It’s a different art form than guitar, but another way of exercising the brain.”