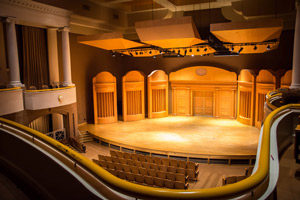 Great talent has graced the stage of the Falany Performing Arts Center over the last 15 years, and the 2017 season is no different. See www.reinhardt.edu/fpac for upcoming shows.

The Floyd A. and Fay W. Falany Performing Arts Center at Reinhardt University is celebrating 15 years of bringing quality entertainment and culture to the community this February.

“The Falany Performing Arts Center on the campus of Reinhardt University is the hidden gem of North Georgia.  We have a fabulous evening planned to celebrate the Falany’s 15 years in North Georgia,” said Joan McFather, a member of the FPAC’s Advisory Board. “We invite you to come celebrate with us.”

The anniversary celebration will be held Friday, Feb. 10, beginning with a pre-concert reception at 6:30 p.m. Hors d’oeuvres will be served. The evening will recognize the contributions of President Emeritus and Mrs. Floyd A. Falany.

Opened in 2002, the FPAC is home to a 350-seat concert hall that has seen the likes of the Atlanta Symphony Orchestra, the Drifters and the Vienna Boys Choir.

“There are appearances by stage personalities and programs for children. The FPAC is the home of one of the finest music programs in the state, and students of the School of Performing Arts appear regularly in plays, musicals, operas, choirs, instrumental ensembles and recitals,” McFather said.