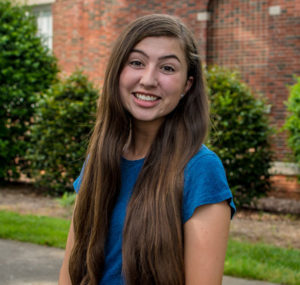 Jessie Fanczi, junior creative writing major, is already building her resume as she has been accepted for publication in “Blue Marble Review,” earning her first paid publications, as well as being published in the Undergraduate Research and Creative Activity magazine (UReCA), published by the National Collegiate Honors Council.

This fall, “Blue Marble Review” will publish Fanczi’s short story, “Carver Mountain Road,” which is a short tragedy that delves into the life of two best friends, turned romantic, Ellie and Nate. This story was written with the intention of emphasizing the importance of telling people how you feel and explores the daily lives and issues of young adults.

Fanczi, of Dacula, Ga., found inspiration in her Literary Editing and Publishing class with Dr. Donna Little, associate professor of English, as she began to realize the importance of building up a resume of publications to help her fulfill her dream of becoming a published novelist.

All within the same weekend, Fanczi was accepted for publication of her poem “With my Brother in the Marsh” for the winter issue of “Blue Marble Review,” as well as her critical analysis “Painting the Negative Space: How Faulkner Silhouettes the Living Ghost of Flem Snopes” in the UReCA magazine for publication in their 2019 issue.

“This whole experience has only added to my drive to push forward with my writing towards the ultimate goal of publishing a novel,” said Fanczi. “I’m so blessed and thankful to be at a school with professors who are helping me live my dream now, rather than just preparing me to do so after graduation.”