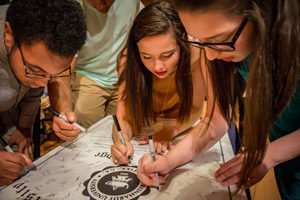 The 2016-17 academic year kicked off with high energy and great involvement, according to the Office of Student Affairs.

“For the first weeks of school, we’ve had a large amount of student involvement on campus and a lot of energy and excitement from the students,” said Dr. Walter May, assistant dean of students and director of student affairs. “At the series of Welcome Week events, we saw large turnouts. Over 100 students came to watch the outdoor movie, and we have the largest group of students involved in the induction ceremony than we’ve had in previous years.”

He said he has seen many students inquiring about how they can get involved on the Reinhardt campus, as well.

May said more than 350 students, or 99 percent of the students new to Reinhardt, attended the 17th Annual New Student Induction Ceremony held at the Falany Performing Arts Center.

With faculty and administration donning their regalia for the formal ceremony, the New Student Induction Ceremony brought forth new RU students to sign the honor pledge and to be ceremoniously welcomed to Reinhardt. The induction ceremony is an annual event that signals the beginning of a student’s journey at Reinhardt. According to the University, the formal ceremony intentionally mirrors the symbolism and importance of commencement.

“This important ceremony is steeped in tradition. New students are charged to uphold the University’s Honor Pledge as they strive for academic excellence and community involvement. New students also have the opportunity to sign the Honor Pledge, which marks their official induction into the Reinhardt community and be included in the traditional class picture,” the program for the event stated.

The Honor Pledge was written by a student in the early 2000s and later revised to include faculty.

While the induction ceremony was the ceremonial welcome to new students, all students were welcomed back with a full week of events including a merchant fair, outdoor movie, blood drive, prayer walk and involvement fair. Students also participated in Playfair, an activity that encourages interaction and conversation with fun games and exercises.

Welcome Week culminated with a block party and pep rally at the Hasty Student Life Center Friday night, and the Reinhardt Eagles dominated its first game of the season beating Point University 55-2.

On the academic side, faculty began preparing for the return of almost 1,500 students to campus long before their arrival. Dr. Mark Roberts, vice president for academic affairs and dean of students, said it’s “refreshing” to see everyone return to campus and engage with one another.

“This is a part of our continual effort to improve our teaching and learning environment. It is always refreshing to see the return of faculty and to watch them engage with our new students,” Roberts said. “After the faculty met with their first-year advisees, I was thrilled to see professors and students strolling through our University in a Park. It’s an image that harkens a back to Ancient Greece, when philosophers such as Plato and Aristotle indulged in important conversations while walking together the natural environment. If there is one image that captures the thriving atmosphere at Reinhardt, its teachers and students walking alongside each other in the mutual interest of learning.”