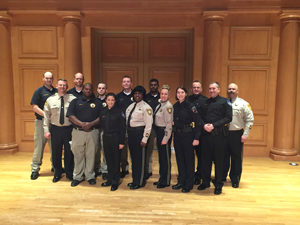 Fourteen officers are certified after graduating from Reinhardt University’s Public Safety Institute Dec. 20. More than 70 percent of the graduates left with employment secured at various law enforcement agencies in the area. 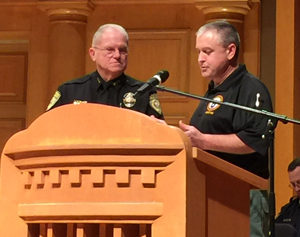 Gary George was honored at the Dec. 20 Reinhardt University Public Safety Institute graduation. He is retiring from the Police Academy’s advisory board.

The ceremony also served as a special acknowledgement for a Reinhardt Public Safety Institute Advisory Board Member who has served since the academy’s inception: Gary George.

“Gary was instrumental in the establishment of basic law enforcement training at Reinhardt University and has always been an advocate for higher education and police professionalism.  His leadership, wisdom, and passion for service will be greatly missed,” Drawdy said.

George is retiring from his position as the director of Alpharetta’s Department of Public Safety, the position for which Robison was appointed.