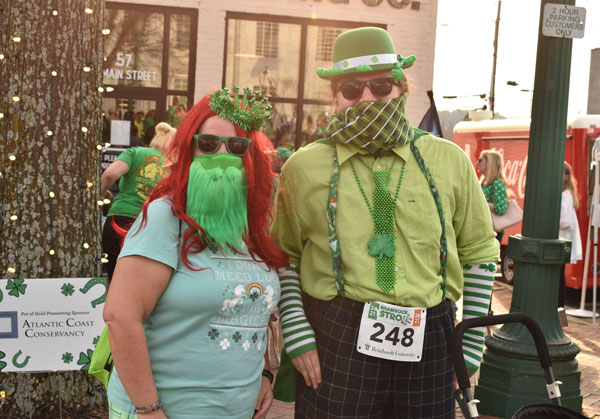 Thank you to everyone who came out to support Reinhardt's Pickens Scholars!

Green and gold - along with blue and gold spirit - flooded the streets of Downtown Jasper for the Fourth Annual Shamrock Stroll .5K to celebrate St. Patrick’s Day the Reinhardt way – raising funds to support Pickens County students as future Eagles.

Reinhardt University and the community worked together to raise $19,424 for the Pickens Scholars program, which provides scholarship dollars to Reinhardt students residing in Pickens County.

This year’s stroll was especially motivating as the Third Annual Shamrock Stroll was canceled at the start of the pandemic. Dale Morrissey, senior director of community engagement, was eager to raise scholarship dollars for local students during a difficult year for many.

“We are so grateful to all who contributed to the Pickens Scholars program at this year’s stroll,” said Morrissey. “Reinhardt University and local students thrive because of the support from our communities. It was great to see children running around, finding the painted rocks and having fun. Hopefully, these young Pickens County residents can become future scholars at Reinhardt.”

The stroll through Downtown Jasper was led by Pickens Citizen of the Year, Margy Lohman, along with the Screaming Eagles Marching Band.

“As a Pickens County native and the director of the Screaming Eagles Marching Band, it is an honor for me and the band to be a small part of this wonderful event,” said Steve Watson, director of athletic bands. “Raising awareness and making connections between the great students of Pickens county and the Reinhardt University family is extremely important and beneficial to all."

Chairman of the Pickens Scholar program and Pickens Chamber of Commerce president and CEO Amberle Godfrey appreciated all who took the time to party with a cause.

“The weather was perfect for a stroll down Main Street in Jasper to support Pickens County students who attend Reinhardt University. Everyone was so excited to dress up and celebrate. A huge thank you for the support from our community.” said Godfrey.

Those in attendance strolled the .5K to the post-race party, complete with activities for all ages. Coca-Cola and Pendley Creek Brewery offered refreshments and The Dashcrackers provided music throughout the evening.

Prizes were awarded to the Most Creative Costumes, Carey Sharp (female) and Chuck Haddon (male). A few furry friends placed for their costumes, including Darcy in third, Carnon in second and Sparkles in first.

Since its initiation in August 2017, the Pickens Scholar program has raised a total of $162,082.60 for scholarships to benefit Pickens County residents studying at Reinhardt University. Thank you to everyone who continues to support Reinhardt University and its Eagles.

Thank you to our sponsors!