The Funk Heritage Center is known for its rich knowledge of local history, including the unique experience of the “Tools of the Trade” exhibit.

Visitors who walk through the exhibit dedicated to Alan Sellars experience a look into a portion of history not often considered. Many museums offer insight into the end result of what moved society further along yet would be impossible without the tools that created the inventions used in everyday life. 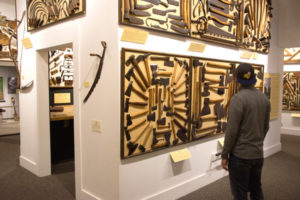 In the early 1950s, the late Alan and Louise Sellars opened a retail hardware business and gift shop in Marietta, Ga. After decades of collecting antiques, Louise donated their tool collections to Reinhardt’s Funk Heritage Center (then known as the Bennett History Museum) in 1999 in honor of her husband, who passed away in 1991. That donation helped create the “Tools of the Trade” exhibit as it’s known today.

The Sellars’ hardware store stood out from others, its walls adorned with antiques. What began as displaying their favorite tools turned into a much larger project. Throughout their time as store owners, the couple developed a passion for collecting antiques, specifically fine paintings and tools. After viewing artist and author Eric Sloane’s museum exhibits, Alan began using panels to display his antique tools, as seen in their exhibit at the Heritage Center.

In 1978, employees Mark Wright, Carter Butterworth and Don Dougan aided Alan in building the panels that would display his massive collection of tools. Eventually, more than 120 display panels hung throughout the store, which transitioned into a gallery space at their new, larger location when the Sellars moved their store in 1985—partially to make room for their collections. A section of their new building became a tool museum and an art gallery for their paintings.

Alan’s collection was a labor of love, much like the items the tools created and the tools themselves. His grandson, Alan Myrick, who since passed away, traveled far and wide with him to continue the collection.

Alan hoped his collection would become a living educational experience, and through Louise’s generous donation to the Funk Heritage Center when it first opened 20 years ago and Dougan’s work in displaying the panels, that desire came to fruition. The more than 10,000 visitors the Center receives each year are able to view the tools that reflect the love and care of the craftsmen who once used them. The Sellars family view the tools as “living pieces of history that fit within the hand.”

“Everything has changed so much in the last hundred years, but the old technology can’t be beat,” said April. “It’s just not the same when everything’s done by machines. The handiwork that these tools created is something I want visitors to appreciate. They’re antiques that are invaluable, they have so much energy from the people who created them.”

The years of dedicated collecting and displaying of antique tools is evident in this exhibit, as the Sellars’ panels line every wall—reminiscent of their days in the hardware store—and provide visitors years of history to take in and reflect on the ways each tool both fulfills a specific purpose and contributes to the outcome of the others in its set.

To learn more about the Funk Heritage Center and the “Tools of the Trade” exhibit, visit https://www.reinhardt.edu/funkheritage/.