Students, along with their family and friends, and Reinhardt faculty and staff joined together Thursday evening to celebrate Dr. Ken Wheeler and nine of his students winning the Georgia Historical Society’s John C. Inscoe Award for their article “Black Student Experiences in the Racial Integration of Reinhardt College, 1966-1972.”

Todd Groce, president and CEO of the Georgia Historical Society, traveled from Savannah to present the award at Ken White Atrium at the Falany Performing Arts Center for the best article published in GHQ in the previous year.

“This kind of collaboration, I think could only happen at a school like Reinhardt University,” Groce said. “It says a lot about the quality of the education here. I don’t think if you went to another university that you would have the interaction with a professor like this and with this kind of undergraduate research and someone who is a distinguished historian. I think it speaks very highly of this institution.”

“Undergraduate research is one of our High Impact Practices here at Reinhardt University. To have that effort acknowledged at the state level is truly exceptional. Thank you, Dr. Wheeler, for mentoring our young men and young women to be historians,” Reinhardt President Kina S. Mallard said.

The article tells the story of the experiences of Reinhardt University’s first African American students, and the nine students involved in the project worked alongside Wheeler and each other to conduct interviews and delve into Reinhardt’s history. Wheeler said he laid out what he thought was possible to students in his Interdisciplinary Studies and “they were motivated from the start,” he said.

The students who collaborated with Wheeler and are co-recipients of the Inscoe Award are David Busman, Jessica Fanczi, Madeline Gray, Gladys Guzman-Gomez, Abigail Merchant, Madelyn Montgomery, Bradley Niday, Kailey Payne and Aliyah Reeves. Those in attendance were presented with certificates for their efforts. The $500 cash prize will be divided between the 10 award winners, Wheeler said.

“I’d like to offer thanks – all of us would – to the people who are not here tonight but they were here when it happened, the first African American students at Reinhardt in the late 1960s and early 1970s,” Wheeler said. “We are thankful for James T. Jordan, Cynthia Durham, Stanley Porter, Paul McIntosh, Gwen Webb, Greg Rucker. They cooperated with us, gave us wonderful interviews and shared with us their experiences. We never could have completed the project without their help.”

During Thursday’s presentation, Groce read the comments of the Awards Committee Chairman, who shared why the group’s article was selected for the Inscoe Award and how their work reflects Inscoe’s values in education.

“The authors enrich our understanding of desegregation by taking as their case study, Reinhardt College, a small private institution that shared little in common with southern flagship state universities whose stories have attracted scholarly and popular attention. Equally important, the article models collaborative scholarship in a way that reflects the dedication to teaching and mentoring of the prize’s namesake, John C. Inscoe.” 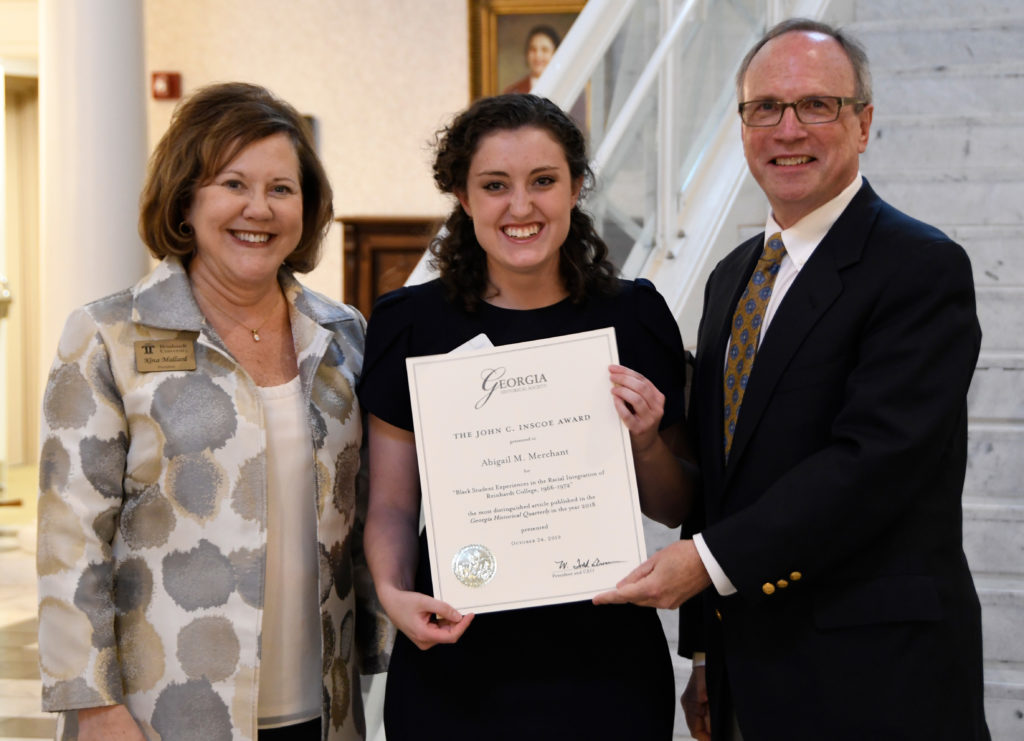 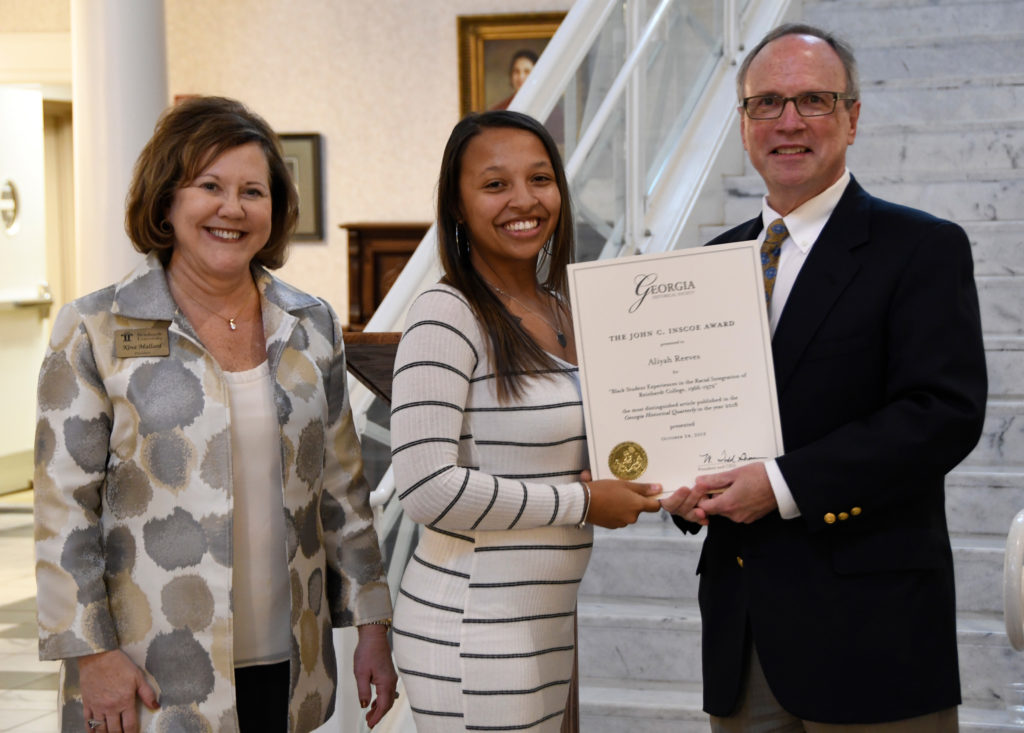 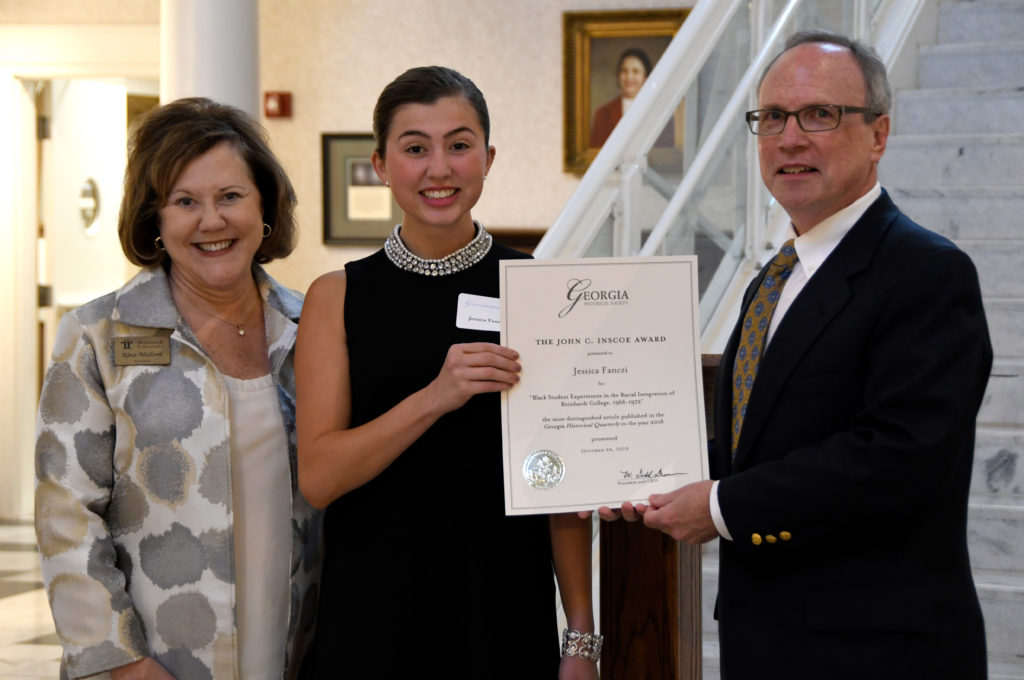 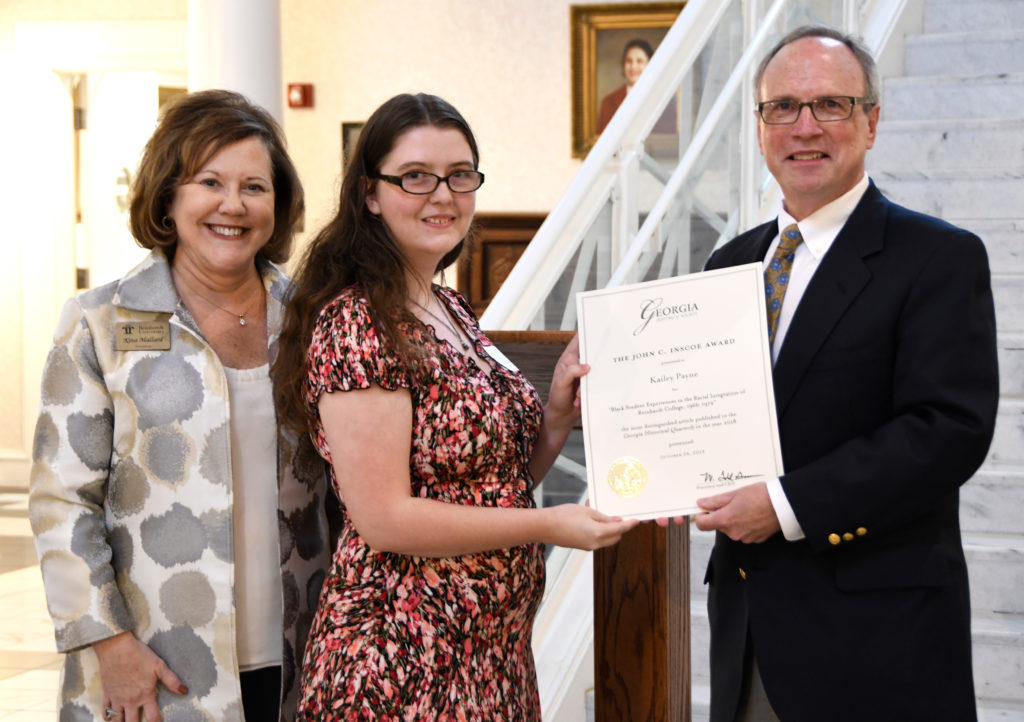 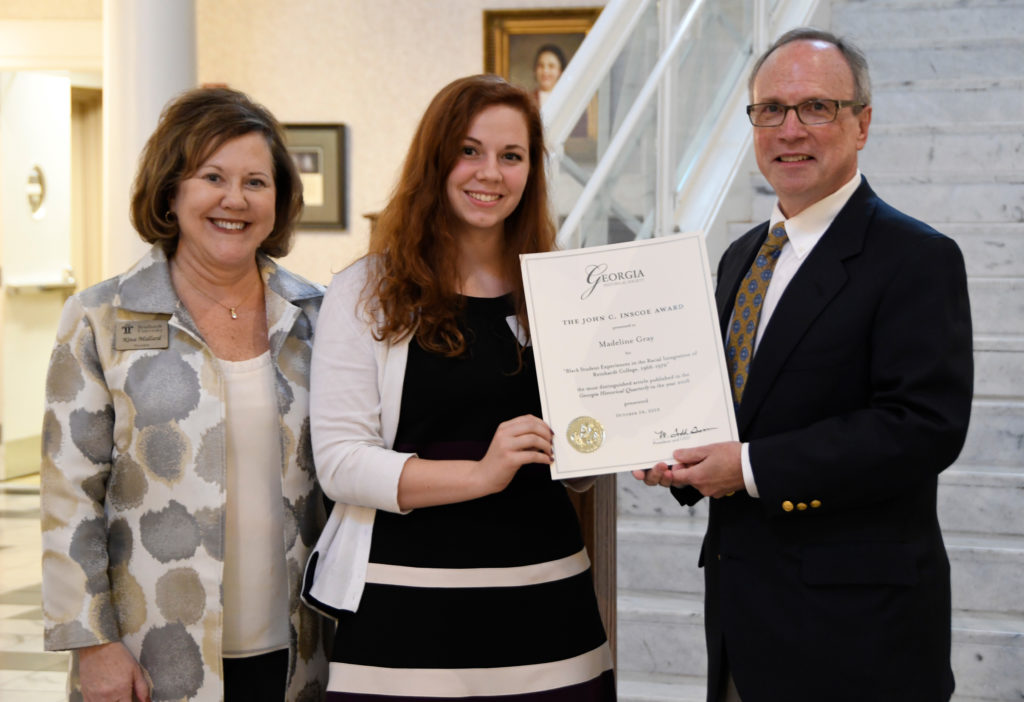 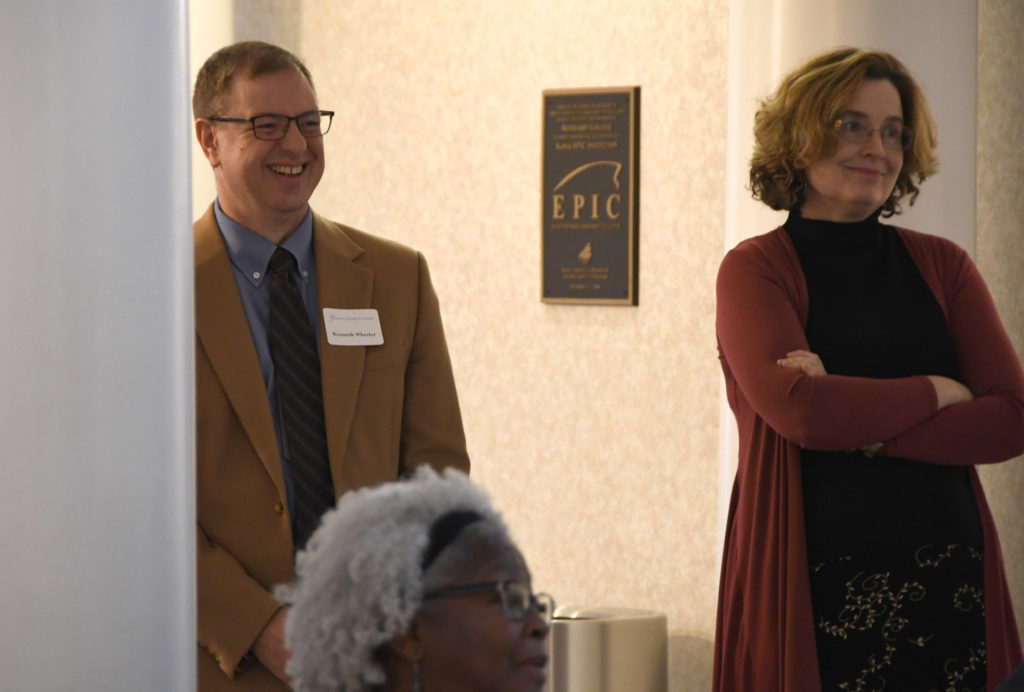 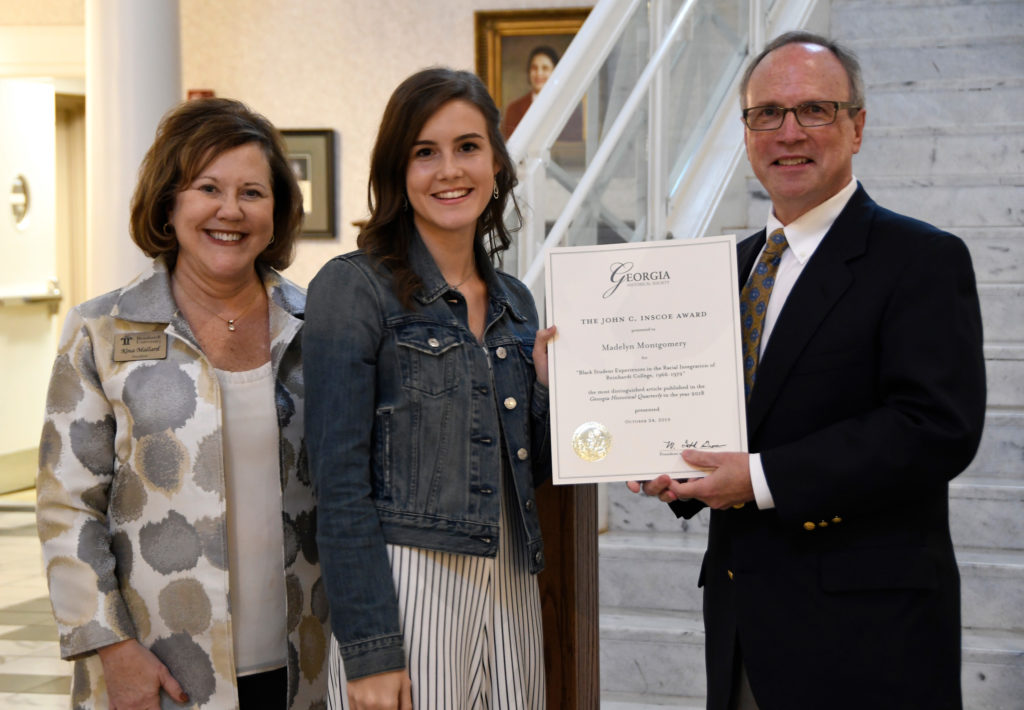 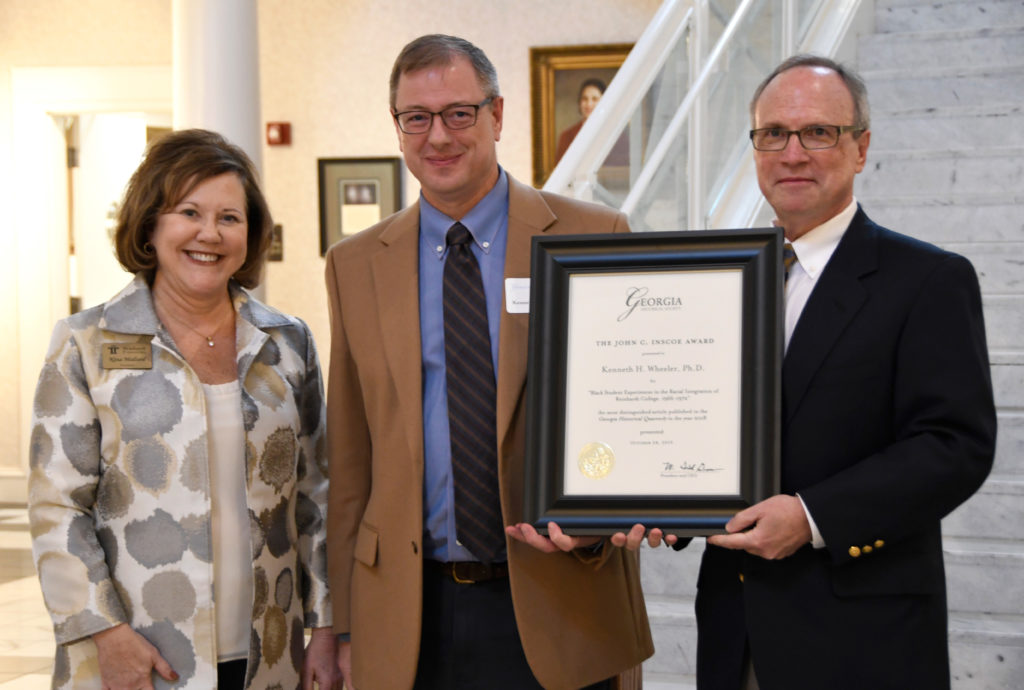 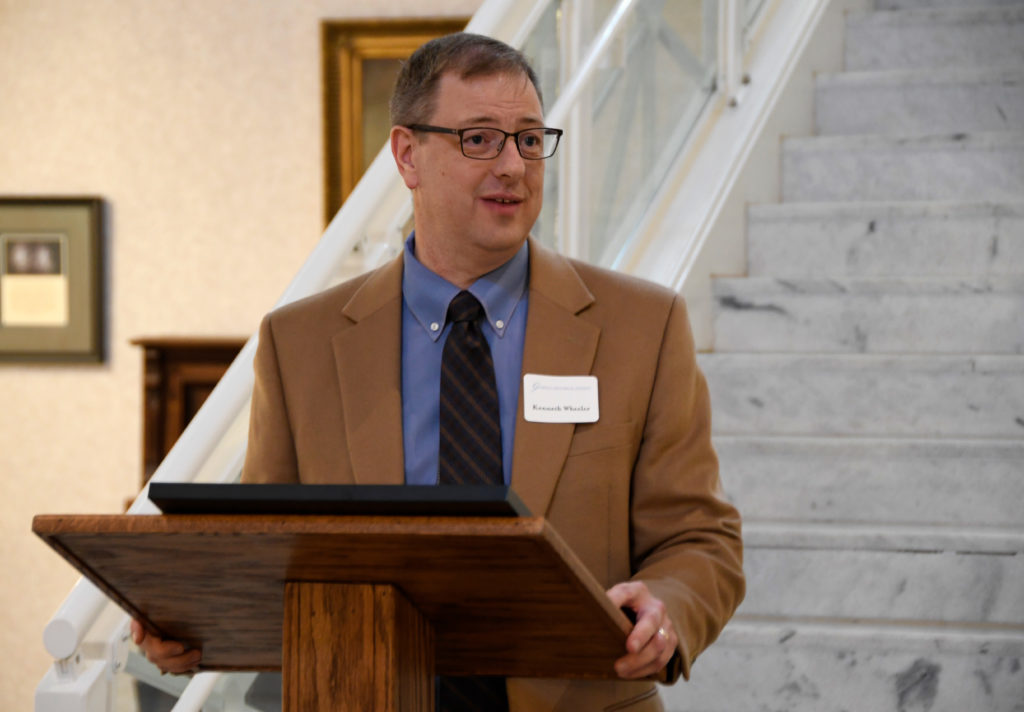