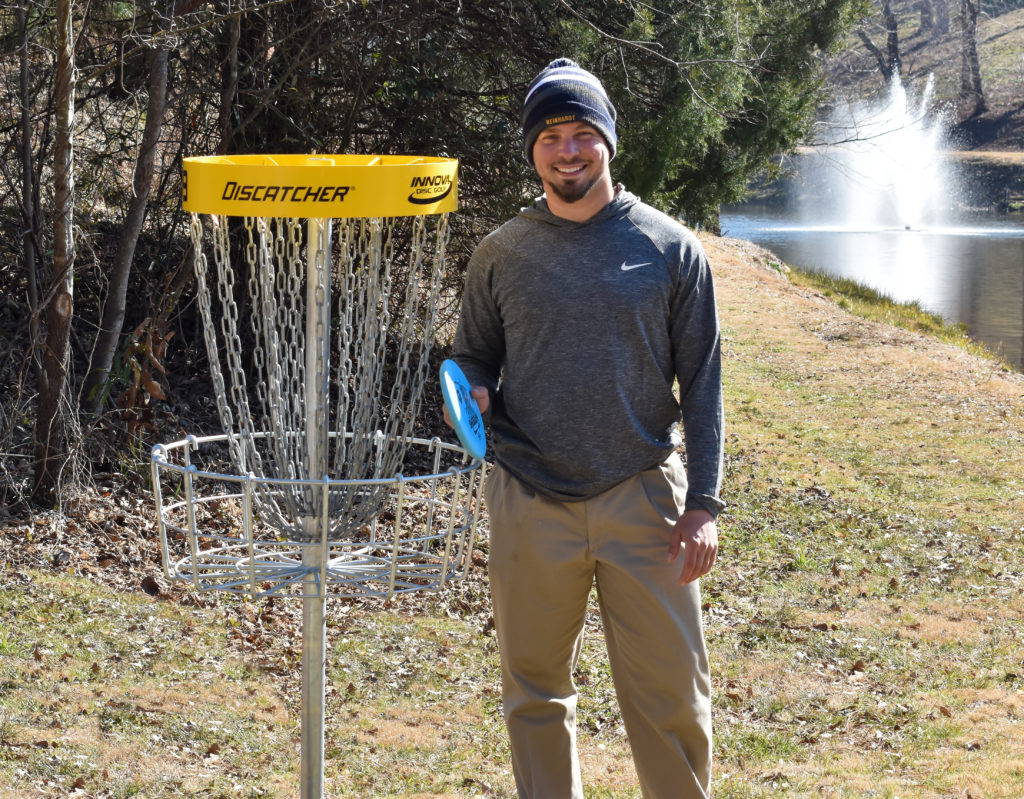 A Tournament that sold out in just a few hours, professionals and amateurs competing, a community expanding in fun and sport, discs flying across campus – this is Reinhardt’s Disc Golf! The University officially opens its newly expanded, professional 18-hole disc golf course on Saturday, Feb. 12. A ribbon cutting and an inaugural tournament celebrate the new course – an event worth the wait, after months of creative planning and design.

The original nine-hole course opened on campus in the fall of 2014. Since then, the popularity of disc golf among Reinhardt students and the external community has grown exponentially. Senior, Austin Daman, president and captain of the Reinhardt Disc Golf Club Team, attributes much of the growth to the pandemic. “When COVID-19 started, people were afraid to go into buildings, but they weren’t afraid to go outside,” said Daman. “Disc golf grew in popularity because people could easily distance from others, no one shares equipment, and the sport is healthy, outdoor exercise.”

Increased growth and popularity have disc golfers searching for courses, and Reinhardt boasts a prime location. “It’s in the middle of a disc golf ‘dead zone.’ Only one other course exists in Cherokee County – Sequoyah Park in Canton. Now, Reinhardt is on the map for disc golfers in Blue Ridge, Jasper, Ellijay, and Canton.”

In the spring of 2021, Daman, who has been playing disc golf for over three years, approached Walter May, Ph.D., Reinhardt’s dean of students, about launching a disc golf club team and expanding from nine holes to a full 18-hole course. “When I first approached Dr. May with my ideas, he was already thinking about the possibilities.”

“We had increasing interest in disc golf on our campus,” said May, “and thought it necessary to re-envision and expand the course from the original nine-holes to a tournament-ready 18-hole course. Upgrades now make the course both challenging enough and large enough to be competitive and attract more advanced players.”

Mark Sheldon, owner of TrainHopper Disc Golf, led the course redesign. An avid disc golfer, Sheldon started his organization to create disc golf tournaments in the Greater Atlanta area. Reinhardt’s course was his first design project. A resident of Cherokee County, Sheldon played the original course and formulated new ideas. He describes the new course as an “intermediate level course that highlights the natural beauty of the campus, designed to blend into the campus scenery.”

The February tournament will be the second event hosted at Reinhardt. “Last summer we had a tournament called Fairways and Fireworks - a fundraiser to help the disc golf team and support course expansion. We had a full tournament with 18 holes, and considerable attendance and participation - a great display of support that helped raise funds to move us forward,” said Daman.

North Georgia disc golfers have been eagerly watching the progression of Reinhardt’s new course. “The tournament sold out within four hours of opening registration in January,” said May. Amateurs and professionals will compete in the tournament.

Reinhardt’s course is also included on the UDisc app, used by disc golfers worldwide, to find courses and track their scores. During January 2022, more than 100 disc golfers logged their scores on the Reinhardt course - nearly three times more than in all of 2021!

“People are really excited for Reinhardt,” said Daman. “Last Tuesday, I was on the course at 9:30a.m., before one of my classes, and there were four groups of people already there!”

To play, or to join the team, “you just have to have the willingness to try and the desire to have fun. All of us on the team perform at different levels, from beginner to advanced, and in between. There are no tryouts to join, and no one has to compete if they’d prefer not. We welcome everyone with open arms to be on the team and just have fun.”

The disc golf course is open daily to Reinhardt students and the community. Students can check out discs from Reinhardt Central, located on the ground floor of The Hasty Student Center. Students interested in learning more about disc golf are encouraged to contact the Disc Golf Club Team.

The University showcases its newly expanded 18-hole disc golf course on Saturday, Feb. 12 with the official ribbon cutting at 8:50 a.m., followed by the University’s inaugural disc golf tournament. All spectators welcome – but watch out for those flying discs.