Rev. Lonnie Lacy’s Reinhardt Experience came full circle when he spoke to the Class of 2023 during the ceremony he helped create 20 years ago. 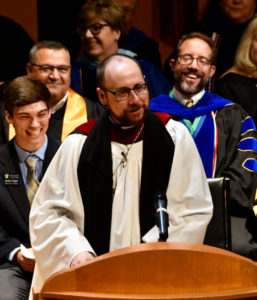 Before he helped create University traditions, Lacy got involved to express his passion for Reinhardt to incoming students.

“My first passion was New Student Orientation because I sincerely wanted every new student to love Reinhardt as much as I did,” said Lacy ‘02.

Initially, his friends involved in student activities piqued his interest in student leadership, and Lacy soon became deeply involved in Student Government, including his position as student body president. While working as one of the lead orientation leaders in 2000, Lacy even met his wife, a 2003 alumna.

“One day when I was sitting in the student activities office, a lovely, bubbly girl named Jay—short for Jessica—came bee-bopping in to drop off her deposit check for New Student Orientation. I still remember exactly what she was wearing,” Lacy recounted.

During orientation, she and I kept ending up in the same places at the same time, and when we did, we would talk for hours. I was still pretty shy at that point, so she had to ask me on our first date. Thank God she did. It was a done deal from then on. She is my best friend in the world, and the life and family we’ve built together is more than I could have ever imagined or asked for. She is the clearest picture I have in my life of God’s grace.”

Lacy’s various leadership positions prepared him for his life’s calling, knowing at 15 years old his call to the ministry. Lacy grew up in South Georgia as an Episcopalian in a supportive church home and attended camps and youth events across the Episcopal Diocese of Georgia. While his church life surrounded him with influential lay people, deacons and priests, Reinhardt’s education of the mind, heart and soul prepared him for seminary by instilling values of leadership and lifelong learning.

“My contemporaries from Reinhardt would be surprised to hear this, but I was really shy in high school. There was something about Reinhardt, though, that allowed me to flourish, grow and find my voice. Reinhardt really has that whole big fish/small pond thing going for it, which allows students to get involved and to use their gifts and voice to whatever degree they feel called.”

“The older I get, the less I know, and the more curious I become. Reinhardt gave me a critical mind and an insatiable desire to learn as much as I can every day for the rest of my life, whether from books, culture, tradition, or my fellow companions along the way. The moment you stop learning, you stop living.”

Along with his leadership abilities and curiosity, Lacy’s time at Reinhardt also grew his faith.

“I was surrounded at all times by people who cultivated their faith; who believed in God as a present, loving reality; who cared about one another in a unique way; and who were always willing to forgive one another’s shortcomings and foibles. Proverbs says that iron sharpens iron and living in community with other Christians like we did at Reinhardt helped to make me a stronger Christian.”

Lacy became ordained as an Episcopal priest in 2006 and is now standing to become the 11th Bishop of Georgia. As his name began to be considered for nomination, Lacy originally felt hesitant.

“I was very reluctant at first when folks began to approach me about it, but after months of prayer and conversation with my family and those seeking to nominate me, I realized that the only faithful response was to make myself available to the process and to God’s will, whatever that may be. That said, I love the Episcopal Diocese of Georgia. It’s where I was raised. It’s where I discerned my call. It’s where I’ve raised my family and have made a life of ministry. If God is calling me to serve as bishop, then I am willing, happy and ready to do so.”

If chosen as bishop, Lacy hopes to strengthen the congregations under his care by using a full range of communication tools to express the full grace of faith to a world Lacy says is in upheaval, where people “are starving for grace without even knowing it.”

“Nobody these days wants to join a church just to have one more thing to do, but plenty of folks out there would give anything to hear someone say, ‘I know you’re under pressure. I know you’re buried under expectations from your job, from your family, from politics, from the news, from yourself. But you don’t have to live that way. You don’t have to be perfect. You don’t have to have it all figured out. You are loved. You are forgiven. You are reconciled to God, warts and all, and you can breathe easy.’ I want to help every Episcopal church in South Georgia to be a beacon of that kind of light in every way they possibly can.”

His passion for the Episcopal church is not unlike his love for Reinhardt. When Lacy addressed Reinhardt’s Class of 2023, 20 years after he sat in their position, his desire to express the belief that Reinhardt changes people in a unique way felt abundantly evident.

“Whether painting ourselves in blue and gold and creating superfans for basketball games, welcoming new students into the life of the college, or holding the administration accountable for their decisions, Reinhardt was always at its best when students, faculty and administrators worked together to lift the spirit of the whole place up.”