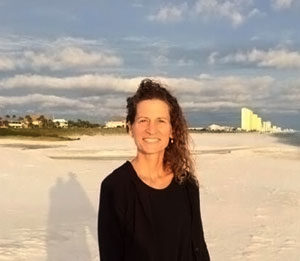 Longtime Reinhardt professor Dr. Bobby Epling has established a scholarship in memory of his wife, Susan Sams Epling ’87, following her death at the age of 50 from complications related to breast cancer.

The family held a celebration of life service for Susan in the Bannister Glasshouse, Hasty Student Life Center at Reinhardt University on Saturday, Dec. 8, 2018. The celebration was attended by many family and friends.

Described by Bobby as a “Christian of quiet, warm, and enduring strength and optimism who was beloved by all who knew her,” she kept a cheerful outlook even as she faced two separate breast cancer diagnoses the last several years of her life.

A native of Cherokee County, Susan grew up in the Avery community and attended schools in the county finishing at Cherokee High School as valedictorian in the Class of 1985.

As a student at Reinhardt College from 1985 to 1987, Susan was a two-sport athlete earning letters in basketball and softball and was voted by her fellow athletes as permanent captain of the 1986-87 Lady Eagles basketball team. She graduated as salutatorian of her 1987 Reinhardt class, and went on to University of Georgia where she was a 1989 Phi Beta Kappa graduate with a B.A. in English.

Susan continued her education at the University of Tennessee, studying library and information sciences. A recipient of the prestigious Hilton Smith Fellowship, she graduated with the Master of Science degree. While at UT, Susan taught children’s literature for several years before moving on to The Ohio State University where she completed coursework for a Ph.D. with a perfect 4.0 GPA. She was working on her dissertation when her son, Jackson, was born in 1998, at which time she decided to devote her energies full time to family.

Before the family moved to Boca Raton, Florida, the story is told of an afternoon with Jackson in the family’s neighborhood in Cartersville. It seems Jackson observed his mother visiting with all the passersby while he and his dad waited for her to come into the house. With a bit of indignation, Jackson stood up and said, “Mom, you’re nothing but a Neighbor Lover!” From then on, it was, reports Epling, “our go-to insult for Susan.”

Susan is survived by Bobby, her husband of 30 years; her son, Jackson; parents, Melvin and Paulette Sams; sister Mary Marsh (Sam), brother Russell Sams (Eaddy); father- and mother-in-law Bill and Judy Epling; and many others including nephews, nieces and extended family and friends. She was preceded in death by her brother, Stephen, and both maternal and paternal grandparents.

To contribute to the Susan Sams Epling Memorial Scholarship fund, please go to Reinhardt.edu/givenow, send a check payable to Reinhardt University noting the name of the scholarship or call (770) 720-5621 for assistance.