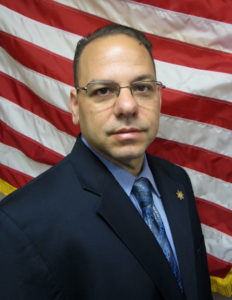 After graduating high school, Jamie Gianfala ’16 pursued his dream of becoming a police officer. He soon realized his goals to rise in rank, however, could only be met by furthering his education.

Gianfala recently earned the title of Deputy Chief Marshal of Cherokee County, a promotion that all began with his going back to school. With his degree from Reinhardt University’s Organizational Management and Leadership program, Gianfala has been able to take on new roles and responsibilities throughout his career.

“I had early success; I was able to obtain different positions very fast,” said Gianfala. “I then had the opportunity to achieve rank in the department. I would from time to time take a class but never focused on my education. I was transferred from shift to shift as I moved up in the organization. I would always make the excuse ‘I will get my education later.’”

When Reinhardt alum Roger Garrison served as sheriff, his focal point was education, showing Gianfala that if he wanted to advance as a police officer, his education needed to match his experience.

“Stacey Williams taught some of the leadership classes. I looked at Stacey Williams as a mentor. He was an adult learner when he went to RU. He, like me, had a family, full-time job and the other distractions in life. I enjoyed my experience in the Organizational Management and Leadership program and really learned to apply this knowledge in both my professional and personal life.”

“Reinhardt has given me opportunities that I do not believe I could get anywhere else. I tell people go to RU; sacrifice today – enjoy the rewards every day.”

Gianfala describes Reinhardt as being about “family and connections,” saying the friends he made became his family. He also found his career connections became widespread.

“I found that so many people in the business world are connected to Reinhardt University. When you speak in the community and you tell them you are a graduate of RU, that means something. They know you are part of something special, you have been taught the good qualities that everyone expects.”

Not only did Gianfala form new connections, his own daughter followed in his footsteps. After playing softball for the University and graduating in 2018, Madison Gianfala now teaches in Cherokee County.

Gianfala’s degree continues to bring new opportunity to his career. He currently serves as an adjunct professor for Reinhardt’s Master of Public Administration ExCL program. Additionally, he was recognized as a Reinhardt University 10 Under 10 alum.

“I love RU, my experience was wonderful. I have been blessed in my job. The only regret is that I did not go to Reinhardt straight out of high school. There are more obstacles for the adult learner, but Reinhardt understands that, and it shows.”