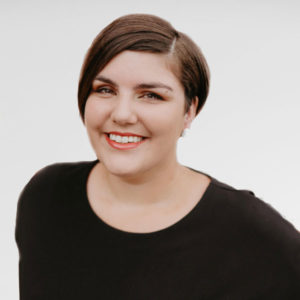 Eight years ago, Jamie Landers Foster graduated from Reinhardt University with a degree from Reinhardt’s business school, not knowing what direction to take next. Now she manages Greater Community Bank in Rome, Ga. while raising a family and staying involved in her community.

Foster began her time at Greater Community Bank in 2016 as the executive assistant to the president and CEO before taking on the role of marketing director two years later. She now serves as the branch manager for the East Rome location. When she first graduated, however, Foster had little direction with her career.

“I had no idea what I wanted to do. I can tell you, however, that I spent time as a sandwich-maker, a title-pawn lender and even a marketing director,” said Foster. “Fast-forward to today and I am now an MBA graduate, a wife, a mother, a homeowner and the recently-named branch manager of Greater Community Bank after serving as marketing director for the same financial institution for nearly five years.”

During her four years at Reinhardt University, Foster spent her time preparing for the future without realizing she was doing so and credits a large portion of her success to her time as a student. Living on campus and away from home for the first time motivated Foster to make decisions about prioritizing and creating goals, skills she uses to this day.

“At the time, those successes were smaller and more short-term, whereas today my successes are much broader, but the concept behind it remains the same,” Foster continued. “From winning an essay contest to earning a life-changing promotion, the skills I gleaned from my time at Reinhardt have allowed me to continue to set – and achieve – my goals.”

Foster chose Reinhardt University after receiving a choir scholarship. This began her diversified experience on campus, as she performed in choir and studied with the McCamish School of Business and Sport Studies. Foster also spent time as a peer tutor and entering academic competitions, in which she won first place two consecutive years in the McCamish School of Business Ethics Essay Competition and the “Year Of” speech competition.

Her various interests continue to involve Foster in many areas within her community. Outside of her career and family, Foster volunteers with Rome Little Theatre and is a member of the Kiwanis Club of Rome. Foster is an active alumnus and serves on Reinhardt’s Alumni Board of Governers. She was named one of Reinhardt’s 10 Under 10 Alumni, Rome Life Magazine’s Top 20 Under 20, and was most recently selected to participate in Leadership Rome XXXVIII.

To encourage current Reinhardt students, Foster offers the same advice she would offer her past self entering into college.

“I would emphasize the age-old proverb ‘don’t put all your eggs in one basket,’ and I mean that in more ways than one. It is important to understand that it’s okay to explore several courses of study before selecting a major; it’s okay to establish a larger network of friends and acquaintances than those you are surrounded by each day; it’s okay to manage a full course-load, but it’s also okay to make time for extracurriculars; and finally – it’s okay to have no idea what to expect – as 2020 has proven to us all – but it’s imperative that you remain academically agile and forward-thinking.”