One early October morning after Joe Sellers and his wife moved to Canton, where both their families hold rich history, the couple woke up to the sound of the Cherokee Scholars 5K running past the front of their house. Since then, Sellers began his active role in supporting their alma mater. 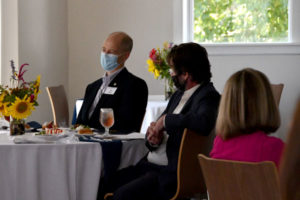 After starting and stopping college, Sellers enrolled at Reinhardt several years later to earn his associate degree and graduated in 1989. This is when Sellers truly began to learn his identity and place.

“It was at Reinhardt that I began to learn who I was. I had never been a good student before that. I was shocked when I had done well at [Reinhardt], I had never done well in school, but it was there that through a job on campus I started to learn about the kind of character that I had never shown before,” Sellers said. “You really do start to see that it’s the place that gives you the kind of support to help you learn what kind of person you can be.”

From waking up to the Cherokee Scholars fundraiser happening outside his front door to becoming chairman of the scholarship program this academic year, Sellers began getting involved by volunteering at Reinhardt’s annual scholarship events, such as the annual golf tournaments and the Born to Run 5K – in which he hands out water outside his Canton home.

Sellers is not the first in his family to attend Reinhardt. Around 100 years ago, Sellers’ grandfather planned to attend college and needed a high school accreditation to apply.

“My grandfather Sellers went to Reinhardt around 100 years ago. He had to go there to get his accreditation because Ellijay didn’t have accredited high schools. That was weird for anybody in the mountains to go to college around 100 years ago, but he had to go to Reinhardt to get that credit in order to be able to apply for North Georgia College where he ended up going.”

Sellers’ grandfather went on to earn a degree in accounting and opened an insurance agency in downtown Ellijay and he also opened a real estate firm. His career fared well as his agency remained open for 80 years and he became the oldest real estate broker in North Georgia, living until almost 90 years old.

Working real estate for 25 years, Sellers followed a similar path as his grandfather, who he refers to as his hero, without even trying to follow in his footsteps. Looking back on his life, Sellers can see where plans fell into place as a result of his faith.

“There’s a verse that plays in my head: delight yourself in the Lord and He will give you the desires of your heart. I always wanted to have that life that my grandfather had and it’s just worked out that way, whether I planned it or didn’t plan it, even down to the kind of house I live in. It’s just one of those things that you don’t necessarily plan but it’s all fallen into place. I feel blessed.”

The goal Sellers hopes to achieve for the 2020-21 year is to raise $150,000 for Reinhardt students living in Cherokee County.

“I know it’s a tough year to do it because everything is a little off, but I think it’s important to aim high. The students need it now more than ever.”

Sellers wants to continue providing the same family atmosphere he received when he attended Reinhardt.

“The main thing that I always think of with Reinhardt is the fact that it is so much more like a family. I’ve been to four other colleges in my college career for different reasons and I can tell you that Reinhardt by far is unique and that it provides, not only education, but also the support and almost a family atmosphere that you do not get at other colleges and universities.”

You can help support Reinhardt University Cherokee Scholars at Reinhardt.edu/Give or by participating in the upcoming Born to Run 5K.