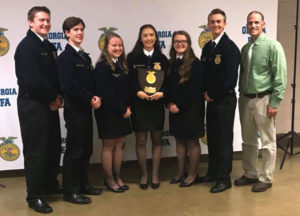 Reinhardt freshman Kaitlin Marick, pictured third from the right, and her team are competing at the National Future Farmers of America competition through Oct. 27.

Marick — a mathematics education major — and her team are competing at the 91st National FFA (Future Farmers of America) Convention through Oct. 27. Her team includes Grace Henderson of Oglethorpe University, Bryce Bowen of the University of Georgia and Madison Jenkins, Matt Long and Bryson Smith, seniors at Gilmer High School. To determine teams, about 15-20 students were selected based on their grades and competed for two weeks with FFA advisors choosing the best for the team.

“The competition focuses on public speaking, knowledge of Roberts Rules of Order, debating skills and if you know how to apply all of this to a meeting,” Marick said of the national competition in Indianapolis, Indiana.

When competing in 2017, the team earned third place, but moved up to first in state in April. Marick attributes their initial loss as leading to their triumph.

“A big thing that helped us win this year, believe it or not, was losing the year before,” said Marick. “In that loss, we were able to gain more experience and grow closer as a team. We also all focused really hard and studied almost every day together.”

Winning at the state level showed Marick how hard work can pay off, which means a lot to her.

“I went in to the competition knowing nothing about Parliamentary Procedure, FFA or Roberts Rules of Order. Now I am a certified Parliamentarian and get this amazing opportunity to travel to Indiana and represent my state on the national level.”

The team will start with a 45-question test on basic parliamentary knowledge based on the Roberts Rule of Order. A 15-question test on meeting minutes will follow, along with a group test analyzing meetings. Another individual test is given, requiring knowledge of direct quotes and page numbers of Roberts Rule of Orders, ending with a presentation.

From being unfamiliar with Parliamentary Procedure to becoming a certified Parliamentarian and competing nationally, Marick has expanded her knowledge and made her mark.