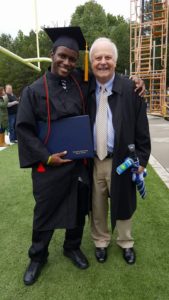 L.J. Stegall is pictured on Commencement Day with Reinhardt University’s first head football coach Danny Cronic, the man who recruited him to Reinhardt.

Known affectionately on campus as “Mr. Reinhardt,” L.J. Stegall was an all-around athlete and academic during his time at Reinhardt University.

Stegall earned his Bachelor of Science in Biology during the 129th Commencement Ceremony at Reinhardt May 5 and has his sights set on a successful professional football career. After that, he hopes to use his degree working with animals.

“I would like to use my degree to become a zoologist, specifically a herpetologist, or use it to become a marine biologist,” he said.

Stegall came to Reinhardt five years ago as part of the University’s first-ever football recruits. The young man is staying true to his passion, hoping to play for the National Football League or Canadian Football League.

“L.J. is a team-first young man,” said head football coach James Miller. “He never worried about stats or yards, he just wanted to win. He worked hard to be the best, not for himself, but for the team.”

Stegall’s infectious personality was reserved before he came to Reinhardt, and it was the relationships he made and mentors who surrounded him that brought out the best in him.

“Reinhardt helped me open up to people,” Stegall said. “Before, I only talked to people I knew. Now, I am comfortable with talking to different people regardless of their background or social group.”

The eldest of his siblings, Stegall knows the weight of being a mentor himself, standing strong and setting a good example for his brothers and sisters.

“My drive is my family and the people who have helped me get this far,” he said. “I will feel bad and I’m sure they will be mad if I didn’t try my best. And with me being the oldest, they look up to me and I don’t need to set a bad example.”

His drive and dedication is something others admire.

Coach Miller said, “I have a 1-year-old son, and if he grows up to be half the man L.J. Stegall is, I would be extremely happy.”

Track and field coach Jordan Turner said Stegall likely doesn’t realize the full impact he’s had at Reinhardt, on and off the field.

“I personally believe L.J. is the most impactful student athlete in history of the Reinhardt Athletic Department,” Turner said. “For the very reason his teammates jokingly call him ‘Mr. Reinhardt,’ the impact he had on the field, track and the classroom will be very difficult for me to replace in the future. His competitiveness among his teammates and competitors is unmatched from anyone I’ve ever had the opportunity to coach.”