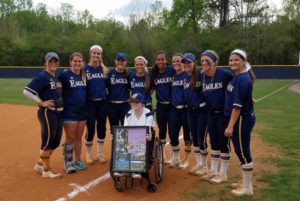 Kelita Robinson, a 21-year-old Cartersville resident, was surprised on Senior Day by the Lady Eagles softball team. Coach Jade Geuther has given Kelita the title of the Lady Eagles’ biggest fan.

Kelita Robinson has followed the Lady Eagles softball team for several years, keeping a close eye on Taylor Braselton and Sydney Flowers since their travel ball and high school days.

Both Braselton and Flowers have volunteered with the Cartersville-Bartow County Challenger League and are mentors to Kelita. Challenger Leagues are divisions of Little League for individuals ages 4-18 (up to 22) with physical and mental challenges. Kelita was born early, weighing only 14.4 ounces. Kelita has cerebral palsy and is confined to a wheelchair.

Braselton remembers meeting Kelita about six years ago – she was shy and barely spoke. “I continuously tried to make her feel comfortable and hold more conversations than before, and before I knew it, she was out there singing the national anthem at the Rome Braves game,” Braselton recalled.

The now 21-year-old Cartersville resident does not let anything get in the way of what she aspires to do.

“Kelita made an impact on my life the very first moment I met her,” Flowers said. “She is so happy to be out playing in the Challenger League that it spreads happiness to others. Kelita is so brave and unafraid of everything around her and never lets her disabilities hold her back.

“Although Kelita looks up to our team, I think we all look up to her more,” she added.

The fanfare on Senior Day was all part of a plan to recognize Kelita for her devotion to the Lady Eagles softball team.

“This was one of the most thought out and thoughtful things I have witnessed,” Kelita’s father, Joe Robinson wrote to President Kina S. Mallard. “The thought that went into the nice comments printed, the photos included and all of the other things that went into this was such a blessing to our Kelita and our family.”

Head coach Jade Geuther, who nicknamed Kelita their “biggest fan,” said the name was fitting for the young woman who has attended every Lady Eagles game possible – at some of which she has performed the National Anthem.

“We celebrated Kelita at this year’s Senior Day, with the class she came in following so closely,” Geuther said. “I presented Kelita with a shadow box, just as our other seniors received. We also recognized her on the field with our seniors.”

Robinson said his daughter was “ecstatic” to receive the award on Senior Day.

“This was an amazing show of class and a lot of thought went into the words in the shadow box as well as the photos used and everything that was done,” he said. “Coach Jade put in her letter to Kelita, ‘When we have a bad day and you are there after the game to get a picture and make us smile, it makes us realize there is more to this game than just winning and losing.’”

“Reinhardt has and will have a special place in our hearts and lives,” he said.