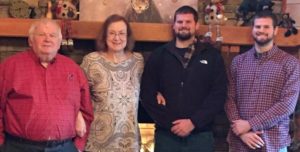 It’s not every day that two generations get to celebrate at a university commencement. This May, Hugh Sheffield ‘68, of Canton, will celebrate his Golden Anniversary as his grandson, Benjamin Wheeler ‘18, walks across this stage to receive his hard-earned degree in Interdisciplinary Studies.

The Sheffields/Wheelers are a Reinhardt family. Wheeler’s twin brother, Joseph Wheeler ‘17, earned his degree in education last year from Reinhardt and teaches at Mill Creek Middle School in Woodstock. The twins’ paternal grandmother, Joyce Eubanks Wheeler, attended Reinhardt when it was Reinhardt Academy and Sheffield graduated in 1968 with an associate’s degree. He continued his education at then-West Georgia College earning his bachelor’s degree in biology with minors in chemistry and math.

“It’s ironic but it is wonderful,” Sheffield said of the upcoming May 4 anniversary. “I told Benjamin last year that this would be my 50th anniversary and also the year he graduates.”

“Well, a lot of my family has been going to Reinhardt. I have a grandmother that graduated from there, and my grandfather actually went there when it was just a two-year school. I find it pretty awesome, and honestly a coincidence because I was actually delayed a year or two from graduating,” Benjamin Wheeler said. “It’s not every day that you can say you graduated exactly 50 years after an immediate family member from the same school. I’m definitely glad to be able to share the moment.”

Vicki Wheeler said she is so excited to celebrate this momentous occasion with family this summer.

“I couldn’t be any more proud that both of my boys went to the same college that both my dad and their dad’s mother did,” she said. “We hope to celebrate this summer at a cookout in Lake Arrowhead with family members, who also graduated from Reinhardt.”

Becoming a family tradition, Reinhardt has earned a place in the family’s hearts. Reinhardt has changed dramatically over the last 50 years, and while some of the buildings Sheffield learned in are still around, his grandsons had different experiences.

Most of Sheffield’s classes were in the Dobbs Science Building and “that’s as far back as Reinhardt went at that time,” he said. But Benjamin and Joseph experienced a sprawling and growing campus during their time studying for their degrees. In the last 50 years, Reinhardt has added residence halls and academic buildings and it continues to grow with an in-progress $24 million construction project including the new black box theater, Eagles View residence hall and Gordy Dining Center expansion.

The Sheffields always have been close to their grandsons and it was only fitting that the young men followed in their grandfather’s footsteps.

“My wife, Deanna, quit her job when the boys were born until they went to school. When I got home they were usually there,” Sheffield said. “Every time we  went on vacation, the boys went with us.”

Vacations consisted of history lessons, which Sheffield believes led Joseph to major in history and go into the education field.

“When they were small, I took them to a variety of things,” Sheffield said. “We tried to go to all the national parks. I think that’s why Joseph majored in history.”

When they visited all the parks, they made sure they would bring kites so the boys could fly them on nice, windy days.

Reinhardt University will confer more than 320 degrees next Friday, May 4, 9:30 a.m. at the annual Commencement Ceremony on Ken White Field at the University Stadium.