Through a virtual election and inauguration process, Reinhardt University’s student body voted for Luis Gonzalez ’23 to take the role of the 2020-2021 Student Body President, leading the University’s Student Government Association and speaking on behalf of the student body. 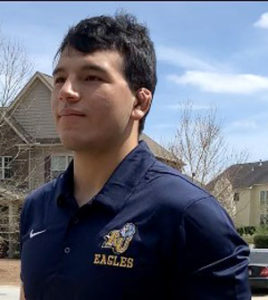 Initially choosing Reinhardt to join the wrestling program, Gonzalez diversified his interests and became an involved student. He participates in RU Leads, Aspiring Latinos Altering Society and served on the Student Senate. After seeing the potential for change on campus, Gonzalez chose to run for his position.

“I decided to run for Student Body President because I fell in love with the Reinhardt campus and its community,” said Gonzalez. “I saw an opportunity to create positive change for Reinhardt and its students, and I took it.”

The role of Student Body President often represents the voice of Reinhardt’s students. Gonzalez wants his peers to feel they can turn to him when questions arise.

“I want them to know that they can come to me with any questions or concerns they have.”

Alongside Gonzalez, the SGA Executive Board will offer their insight as they work to provide students with the most fulfilling and well-rounded educational experience possible. The 2020-2021 Executive Board members include Vice President of Administration, Jordan Chiarelli; Vice President of Student Activities Council, Reagan Cippolina; Treasurer, Kimberly Cabrera; Secretary, Amber Evans; Chief of Staff, Tripp Wickard; Communications Chair, Ian Greene; and Rules and Regulations, Brianna Bal.

“We are working on many projects such as renovating the athletic facilities, implementing infrastructure to make students' lives easier and creating a greater sense of unity among students,” Gonzalez said.

Gonzalez is studying to one day attend law school and become an attorney, majoring in English and minoring in political science.