Reinhardt University’s theatre program has made history with the production of “The Underpants.”

“The Underpants” is an adaptation of Carl Sternheim’s “Die Hose” (The Underpants) written by Steve Martin. The comedy features Louise, played by Mona Swain ’23, a newlywed to Theo, played by James Cunha ‘20, who lived a normal, quiet life until a wardrobe malfunction one day makes her the talk of the town. The play follows Louise as she must decide whether to embrace the change or return to the boring, predictable life she had before.

The production of this show utilized a mostly student-led design team, a first for the program.
Megan Hancox ’21, set designer for this production, is responsible for the design aspects and has been able to incorporate some of her own ideas and visions. 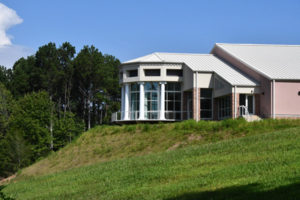 “It’s a huge responsibility. The first thing an audience member sees when they enter the theatre is the set, it gives them a glimpse of what they’re signing up for before the play even begins,” said Hancox. “This is a really exciting opportunity, a wonderful script and a fun concept. It was an absolute blast creating the set, and I’m proud of the work we have all put into this show.”

Another student-designed aspect of “The Underpants” is the costumes, created by Ashlee Morgan ’20. This opportunity and responsibility provided her with valuable knowledge and experience.

“This is my first time costuming a show at this level. With ‘The Underpants,’ I have a greater amount of responsibility. I have to prove that I’m capable of handling this responsibility,” said Morgan. “This work will help me build not only my resume, but my knowledge of this aspect in theatre.”

Swain is looking forward to preforming for the audience and having their reaction to the material.

“The show itself is really funny and the stakes are high throughout so I feel like the audience will be engaged,” said Swain.

Martin was known for being a comedian before he became a writer and producer.

“Steve Martin plays are known for having more risqué jokes so this might be a good show to leave the kids at home and enjoy a night out as grownups,” said Morgan Brooks, director and technical & operations manager for the University Theater.