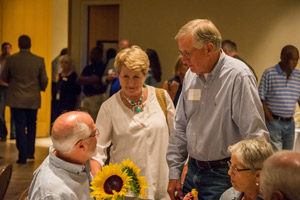 More than 120 alumni and friends of Reinhardt enjoyed food, fellowship and the largest permanent exhibition space for Western art in the country over the weekend.

Reinhardt University held an event July 30 at the Booth Western Art Museum in Cartersville, where attendees were able to tour the museum, hear from museum staff about upcoming events, experience fellowship and great food while supporting Reinhardt.

Reinhardt President Dr. Kina Mallard gave attendees an update on Reinhardt moving forward, including the announcement that a bulldozer and excavator had arrived on campus to plow the road to what will be the new theater building.

“We are extremely grateful to many alumni and friends, new and old, who are interested in the growth and development of Reinhardt University, and who demonstrate that interest by coming out to events like our very successful Booth Western Art Museum event held on Saturday evening. Reinhardt University is truly on the rise,” said Tim Norton, vice president for advancement and marketing. 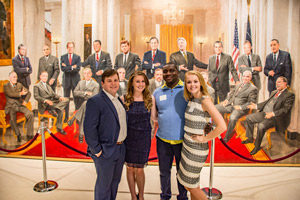 Justin Wells ’16 decided to attend the event after speaking to new alumni director, Pat Patton, and said he enjoyed the networking and hearing about the things to come at RU.

“He (Patton) felt like it would be a good fit for me to come out and get involved with the alumni association,” said Wells, who works at Capstone Financial in Buckhead. “I really liked the redirection talking about Reinhardt reconnecting, the kind of the thing that got me to come to Reinhardt initially.”

Alumni David and Dovie Andrews, Class of 1979, enjoy the event. Dovie Andrews said she attended because she wanted to reconnect with alumni from her class as a reunion for the Classes of 1978-1980 is scheduled for November. It will be held Nov. 5 on campus

“We are going to be doing a class reunion and we were hoping to see some other people from Reinhardt,” Dovie Andrews said as to why she attended the Booth Museum Alumni Event.

David Andrews, who attended Reinhardt with Dovie and who she married just a few years ago, said it was nice to hear from the students and to see that the spirit of Reinhardt still remains true so many years later.

“I loved it. I didn’t know what to expect. I’ve never been to the Booth Museum,” David Andrews said of the event. “I like the fellowship of the folks from Reinhardt. I was very pleased to see members of the Class of 2017 here, football player, the singers, the talent. What I really got out of this tonight is the same little lighthearted kid that stepped on the campus 39 years ago is still here. The spirit is still here. It’s great.”

Stephen and Mary Patton (’73 and ’74) said they enjoyed the event and were pleased that so many people attended. Stephen Patton, who sits on the University’s Alumni Board of Governors, said the presentation embodied the essence of Reinhardt and the family feel.