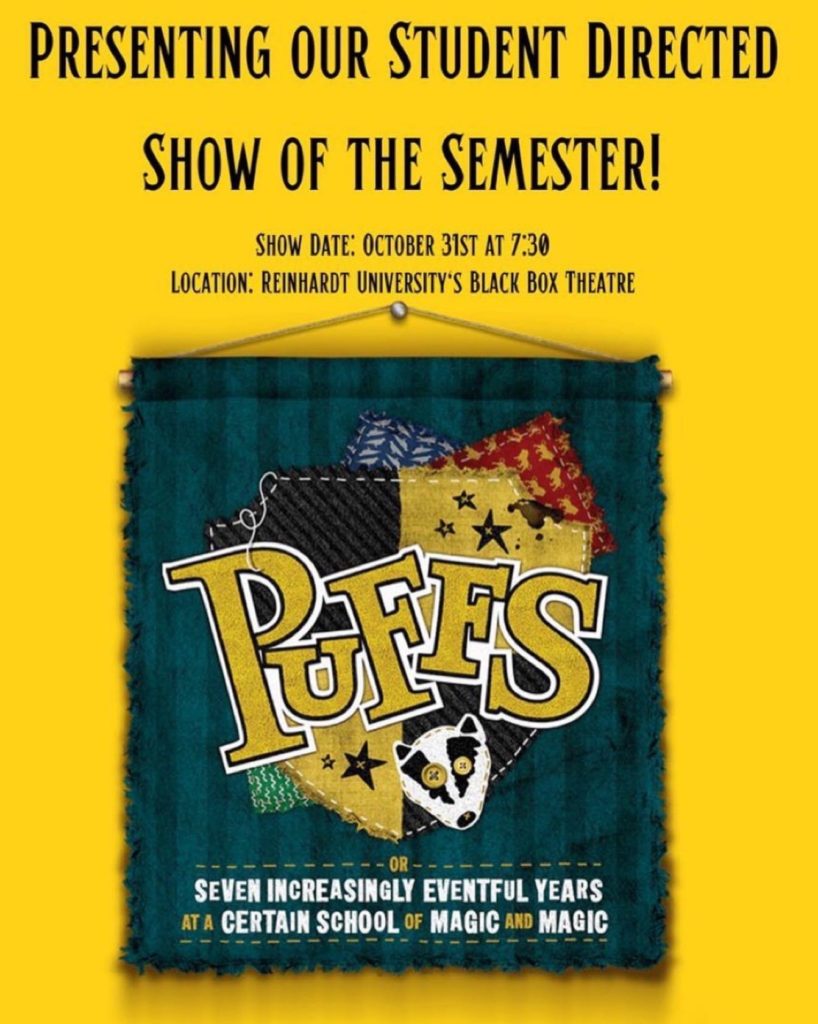 The tale has been told about a certain young wizard who attended a well-known wizarding school and ultimately saved the world from evil. This is not his story. This is the story of Wayne Hopkins, Oliver Rivers, and Megan Jones – three Puffs who just happened to be there too but were not destined to save the world. On Oct. 31, for one night only, the Reinhardt community is invited to see “Puffs” in the University Theater.

Directed by sophomore Olivia Adams, “Puffs” is the first student-directed show of the year. “The Halloween show is one of two shows offered to student directors during the year,” says Adams. In June, the Theatre faculty ask interested students to submit their proposals for a show. Adams pitched “Puffs,” written by Max Cox, for the Halloween show and was notified in late July that her idea was accepted.

“I was nervous when we first began because my only other directorial experience was working summer camp at Woodstock Arts. Austin Harleson (adjunct instructor of theatre) reached out to me and offered to be my directing mentor. He has no idea how much I have appreciated him throughout this process!”

Adams says Harleson taught her that eighty-five percent of being a director is choosing the correct people to play the parts. “Boy did I get lucky with the actors I chose!” exclaims Adams. Junior Nick DeMartini plays Wayne Hopkins, sophomore Casey Johnson plays Oliver Rivers, and freshman Ciara Devane plays Megan Jones. “The cast and the creative team have made this entire process a blast!”

“This has truly been one of the best experiences I think I could have had, and I don’t think I would have gotten this chance – as a sophomore – anywhere else but Reinhardt.”

“Puffs” starts at 7:30 p.m. in the University Theater. Admission is free, but seating is limited. Costumes are encouraged as there will be a costume contest during intermission. Don’t miss this opportunity to see “Puffs” before it vanishes from Reinhardt’s campus forever!

**Please note: “Puffs” is intended for a mature audience.**