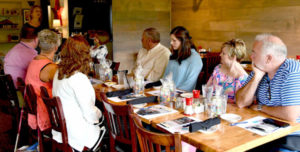 The Pickens Scholars committee had a great lunch at the Woodbridge Inn Wednesday as they planned for the 2018-19 school year. Photo by Jordan Beach

Excitement was plentiful Tuesday at the Woodbridge Inn in Jasper, as Reinhardt University’s Pickens Scholars committee made plans for the upcoming academic year.

“I am so proud of the wonderful support we have in Pickens County. We have many Pickens County residents earning their college degrees from Reinhardt, and it is heartwarming to see community members stand up and rally around them in an effort to raise scholarship money,” said Dale Morrissey, director of development and external relations for Reinhardt.

Community leader Amberle Godfrey has stepped up again this year to lead the committee as its chairperson.

“I decided to remain the chair of the committee because I saw the difference it was making in the community and I wanted to be a part of that for the future of our students,” said Godfrey. “This year, I would like to continue to raise awareness and to increase attendance at our .5K, and be able to help more students.”

The discussion during the kick-off meeting included ways to get the community involved – each committee member was given Pickens Scholars brochures and fundraising plans for the year were announced. The University will continue with the .5K Shamrock Stroll in downtown Jasper, March 16, 2019. The inaugural event held last spring was a smashing success with great attendance and thousands of dollars raised for student scholarships.

While the Shamrock Stroll is months away, Pickens County residents and businesses can show their support for Reinhardt University and Pickens Scholars with a button to display. For more information, visit Reinhardt.edu/Ribbons.