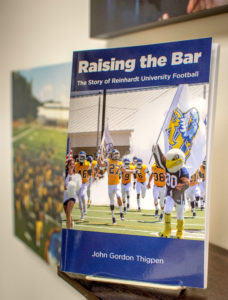 “Raising the Bar” is available for purchase at Amazon.com.

“I was never the main star, but I had a front row seat.”

In the words of Gordon Thigpen ’17, his view of the Reinhardt University football team was one of opportunity and insight.

As Thigpen entered his senior year at Reinhardt University studying English, he was preparing to write the senior thesis, but his advisor, Dr. Joy Farmer, had something else in mind.

“She came up with the idea that instead of writing a really long thesis, it would be more beneficial to me if I could do a history of the Reinhardt football program,” Thigpen said.

Little did he know that “Raising the Bar: The Story of Reinhardt University Football” would be published and available for the world to read.

“I never really thought it would get published. Dr. Farmer, Dr. Wayne Glowka and several others in the University got involved and really pushed it. I did not expect a full-on Reinhardt University Press hard copy,” Thigpen said.

Thigpen, who his professors say has innate talent for writing, walked on to the Reinhardt University football team his freshman year. He began getting playtime his junior and senior year. The wide receiver mainly contributed to the team on special teams. He was voted captain his senior year.

“Gordon has many talents, but among them are his ability as a writer and his love for, and understanding of, football,” said Farmer, professor of English and English program coordinator. “This unique combination made him the perfect person to tell this story–and he tells it to perfection.” 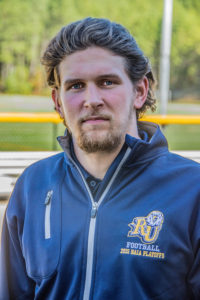 Gordon Thigpen ’17 spent his senior year writing ‘Raising the Bar,” which has been published by the Reinhardt University Press.

Glowka, dean of the School of Arts and Humanities, echoes Farmer’s sentiments about Thigpen’s writing talent. “Gordon was the best writer I’ve ever had in teaching. He has a gift for saying things clearly, simply, briefly. Always makes his point, great storyteller.”

Thigpen was excited to write the book and be able to give Reinhardt a written account of the history of its football program.

The current Reinhardt Master of Business Administration student hopes people will purchase and read the book to learn about the joys of football and a program that embodies what he said “a college football should be.”

“Funny and poignant by turns, ‘Raising the Bar’ charts the improbable success of a football program at a small university in an obscure town. The can-do spirit that animates the coaches, the players and the people who took the risk of bringing football to Reinhardt is the fitting protagonist,” Farmer said. “Moreover, the book is an engaging coming-of-age story in which dedication, hard work and impossibly loud coaches turn boys into men, and loss, death and disappointment temporarily turn them into boys again. Readers do not need to bleed Eagle Nation blue and gold or like sports to enjoy this book. They just need to be fans of crisp writing, action verbs and an engaging narrative.”

Thigpen, a Gainesville native, earned a Bachelor of Arts in English in May 2017. During the 2016-17 school year, he was named the male Student of the Year for the University. After finishing his MBA, he hopes to land a position on a college football coaching staff.