The Reinhardt community is mourning the loss of a well-respected educator who was dedicated to music education, Reinhardt bands and his students. 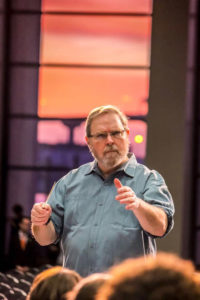 David Harrison, assistant director of athletic bands, died in a canoeing accident on the Etowah River May 2.

As the news broke, social media was flooded with posts detailing the important role Harrison played in the lives of so many.

Harrison served the University since 2010. He accepted the position to help lead the Screaming Eagles Marching Band as assistant director of athletic bands after retiring from his teaching career in Georgia Public Schools. He also served as an adjunct professor of music and as a supervisory faculty member for candidate teachers in the music education program.

After spending 20 years as Director of Bands and Orchestra at Sequoyah High School, he brought a deep commitment to Reinhardt’s music program.

“Mr. Harrison was totally committed to music education, and he never wavered in his support of Reinhardt’s music education students,” said Dr. Fredrick Tarrant, dean of the School of Performing Arts. “He was generally interested in their well-being and success, and countless current and former students looked upon him as a mentor. All of us in the Reinhardt community who knew David feel his loss deeply, and we send our sympathies and prayers to his family.”

One of many stories told on social media of Harrion’s impact included Josh Vavases ’19. During his semester of student teaching Vavases was involved in a car accident. With Harrison as his student teacher supervisor, Vavases was able to push through a difficult season.

“If I had to summarize my experience being under Mr. Harrison, I would say that when it comes down to it, he taught me what it means to persevere,” said Vavases. “Having to teach with fractured ribs and a healing fractured and dislocated humerus, I struggled. Every single day. Mr. Harrison was my guiding light and a breath of fresh air. He saw me for who I was trying to be and what I was trying to do. You could tell he knew how to see past people. I think he knew how because he had a handful of medical issues in the time that I knew him, so I knew when he told me it was going to be okay, and that I only needed to do the next thing, I took it to heart. Because I know he made an active attempt to better himself and those around him. If he was any different, I don’t know if he would have been the man who affected my life so deeply.”

Vavases described Harrison as “a genuine man who legitimately cared about the well-being of others; an influential music educator who had a tremendous impact on his community; a good person who contributed to the goodness of others.”

Harrison will always be remembered as a dedicated faculty member whose mentorship and caring heart inspired those in which he came in contact. His life lives on with his family and with those who will carry out the lessons he imparted.