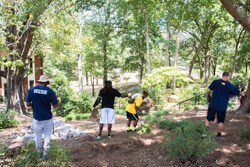 The Reinhardt Physical Plant crews have been getting some extra help this summer while more than two dozen football players have been able to learn new trades, keep their strength up and make some money.

Twenty-seven football players have been working daily all summer to help with everything from moving heavy items, to planting flowers, doing electrical and plumbing work, and doing some hands-on cleaning.

The effort was the brainchild of David Leopard, vice president for administration and finance, and Head Football Coach Drew Cronic said it’s beneficial to the University, the players and the team.

“They are staying on campus and working, and they are able to lift weights in the morning,” Cronic said. “They are getting a chance to be here, make some money and get stronger and faster.”

Missy Dayoub, director of the Physical Plant which includes housekeeping, maintenance and grounds/horticulture, said the players have brought a “fantastic energy to the department.”

“I think they’ve been amazing. They’ve been helpful and respectful. They have suggested ways they can help aside from what we have suggested to them. I’m going to miss them when they are gone,” Dayoub said. “They have had a fantastic working relationship with our crew, and they have learned a lot from our crew.”

Projects the players have worked on include laying decorative rock and pine straw and completely redoing the bank by the Bannister Glasshouse. They have assisted the maintenance crew with plumbing and electrical work, and they’ve tried their skills at HVAC repair as they have worked alongside the HVAC subcontractor for the University.

“They have helped faculty move items around in the academic spaces, and they helped Dr. Joe Kitchens moving items around in the Funk Heritage Center making space for new exhibits,” Dayoub said. “They also are helping Ray Marshall build lockers for the new wrestling program. Next week, they will be working with Dr. Walter May on the trails, and they have set out new flooring in the baseball dugout.”