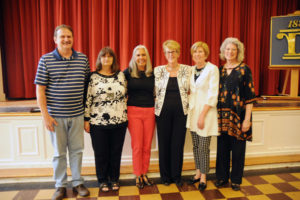 Nearly 160 years of service to Reinhardt University was represented in the Hoke O’Kelley auditorium April 28, as the Reinhardt family said Godspeed to seven faculty members retiring this year.

The afternoon reception was filled with reminiscing, laughter and hugs as Provost Mark Roberts and Physical Plant Director Missy Dayoub shared their thoughts.

Susan Naylor and Andy Edwards each have served the University for more than 40 years, coming in 1975 and 1974, respectively.

“This is an amazing person,” Roberts said. “The first time that I talked with Susan, I knew that you did not mess around when you were in the piano room. The students you teach have gone on to be excellent at their art, one of them is Michael Dubuc who won first place at the Georgia Music Educators State Piano Competition. This is because of you – because you devoted your time to helping that student succeed.”

Edwards, who was not present at the reception, was praised for his work over the decades and for all the students he helped along the way. Roberts said with family members who have degrees in chemistry, he thought he would have a good rapport with Edwards.

“I didn’t need it. Andy wanted to talk about literature, Southern literature. He wanted to talk about Grit Lit,” said Roberts, who has a passion for Southern literature and is the editor of the “James Dickey Review.” “We had an immediate connection. We talked a lot about this region and the importance of the North Georgia region to the rest of the nation.  Andy, coming to Reinhardt, in 1974, has contributed to the progress of North Georgia by educating numbers and numbers and numbers of students who have gone on to be successful.”

Viviana Baxter joined Reinhardt in 1990 and has spent the last three decades broadening the horizons of college students. Roberts called her a “light in our office” when she would drop by the academic affairs office, noting she was always positive, cheerful and thinking of her students.

“She has led study abroad trips to Spain for 15 years,” he said. “Whenever she would go to Spain, throughout the summer I would receive texts from Viviana with photos of her and her students and what they were doing in Spain right at that moment. I always enjoyed that and appreciate your thoughtfulness.”

Kenneth Kull, who is retiring from the Physical Plant after eight years, was honored by his department director. Kull is the go-to when it comes to facility set-ups for everything from special events in the Bannister Glasshouse to Commencement every year.

“Trudy and crew will struggle along and won’t know where everything belongs; but together we will get over this hump with the help of Jacob Christie and Keegan Jump,” she said.

Dr. Cindy Kiernan, dean of the Price School of Education, also was among the retirees honored.

“I found out that she’s not only a fabulous teacher but she also is a great colleague and faculty member,” Roberts said. “When we did a search for the dean of the Price School of Education, we interviewed a lot of great people, and we got a lot of great applications.

“Cindy was one of our internal candidates who applied and hands down beat every candidate who came in that interview process,” Roberts added. “When she took the role of dean, she immediately solved the problem of edTPA (a new, more rigorous test for teacher candidates). Now, 100 percent of our students go through that process and are successful. That is because of your leadership.”