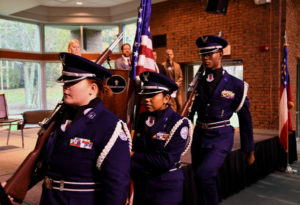 “Reinhardt University’s annual Veterans Day Ceremony is a time for the University community to come together, acknowledge and reflect upon the service and sacrifices that have been made by members of the United States Armed Forces,” said Dean of Students Dr. Walter May. “It is important to honor those who served our country and show veterans that they are not forgotten and that their service did not go unnoticed.”

Keynote speaker A. Dee Morris, Judge in the State Court of Cherokee County, began his presentation with a memory of a veteran named Scott, who took his own life after returning home from war and getting in trouble with the law and was a prime candidate for the Cherokee County Veterans Treatment Court, an accountability court spearheaded by Morris.

“I see Scott’s parents every week in Sunday School class, and hardly a week goes by that they don’t mention Scott or something about Scott; something he did, something he said,” said Morris.

The ceremony concluded with the retiring of the colors while junior Michaela Brock played Taps.

Veterans Day originated as “Armistice Day” on Nov. 11, 1919, the first anniversary of the end of World War I. Congress passed a resolution in 1926 for an annual observance, and Nov. 11 became a national holiday beginning in 1938.