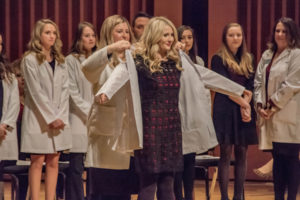 Reinhardt President Dr. Kina S. Mallard recalled in her remarks her interview period, during which she quickly learned that a nursing program was at the forefront of the University’s plans.

“When I was called by Chairman Billy Hasty and asked if I would accept the presidency of Reinhardt University, he said our top priority is to start a nursing program at Reinhardt. I knew I had my marching orders,” she said.

In just two short years, the program was developed and approved by the Southern Association of Colleges and Schools Commission on Colleges and the Georgia Board of Nursing, faculty was hired, funding was garnered and students enrolled.

Beaming with excitement, Cauble School of Nursing & Health Sciences founding dean Dr. Glynis Blackard, thanked those who were involved in the creation of the program and to the students and families who supported one another during an arduous process.

“Even though you are a student-nurse, this coat is symbolic of what it means to be a nurse. As you don this coat, I am hopeful you accept the responsibility that comes with this article of clothing. I hope you accept it with humility,” she told the University’s inaugural nursing class.

During the ceremony, speaker Dr. Carla Sanderson of Union University shared her journey as a nurse and inspired the Reinhardt students to always have hope. She shared a story of a patient who, in the 1980s, was her first heart transplant patient. She stood alongside this man who had recently received a 19-year-old’s heart as he regained strength and received a second lease on life.

“The door opened on our first day and in shuffled a man who was the age I am now. He was clinging to a walker and had a furrow in his brow the concentration of his mobility was requiring. I started thinking ‘someone thinks this gentleman is ready to exercise on a treadmill?’” she said. “My trained eye turned to watch the impact of the activity on my patient’s heart rhythm. That’s when my own heart filled with overflowing joy. I was seeing the strength of a 19-year-old’s heart pumping blood and life beautifully into the frail and weak man.

“Tears flooded my eyes, and I turned to look into my patient’s face … He had raised his eyes to the monitor and slowly he turned his head to meet my eyes and simultaneously we began to smile. We had both together just seen hope,” Sanderson said.

Sanderson told the students that their journey is one of providing hope. She urged the students to always treat their patients with dignity, to be an advocate and to lead their lives the “Reinhardt Way” and to speak up for what is “right, good and noble.”

“It is a noble task, a noble privilege to find and share hope with another human begin. You are donning a white coat of nobility. Maybe it is new to you to think of nursing as noble or to think of yourself as a noble person. It is a noble task to care for those who suffer, the ill, the hungry, the lonely, the vulnerable newborn, the one of old age, the dying,” she said.

Now, 27 of these bright young minds have embarked on their journey to become medical caregivers to their fellow man. Along with the more than 1, 500 students at Reinhardt University, the newly inducted nursing students began their spring semester classes.