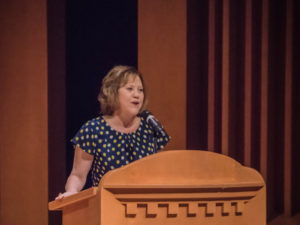 “Welcome back and a special welcome to all new members of our Reinhardt staff and faculty. We have a very promising year ahead, and we’re excited about our fall enrollment growth,” said Dr. Mallard, smiling.

Looking back on the last academic year and preparing for a new one just over the horizon, Dr. Mallard shared the status of a number of programs on campus, in addition to growth in gifts to the University and summer projects soon to be completed – including the renovation of Hill Freeman Library and Spruill Learning Center. The renovation is the result of a unique partnership between the University, Cherokee County, the Sequoyah Regional Library System and the City of Waleska. The renovation was completely funded by Special Purpose Local Option Sales Tax funds in the amount of $1 million.

The newly renovated space feature PC and Mac computers, including laptops for students to use in the space or to check out overnight. There also are meeting spaces available to reserve including a community room, an innovative classroom, a computer classroom and a conference room. Joel Langford, director of library services, will handle all reservations for the space.

A ribbon cutting for the renovated library is scheduled for Oct. 10.

Provost Dr. Mark Roberts also spoke during the State of the University, citing a history of strong academic accomplishments in the 2016-2017 year. The last academic year included the largest graduating class in history with graduates heading to medical school, more than 100 students participating in the 2017 Driscoll Convocation of Artists and Scholars and students studying abroad in Cuba and Costa Rica over the summer.

As the estimated 1,500 new and returning students come back to campus next week, they will notice freshly paved roads and new striping across campus. Residential students living in Herbert I. and Lilla W. Gordy Hall will see some of the summer improvements completed by Reinhardt University facilities employees.

Dr. Mallard touched on a few other topics including:

Also during the State of the University address, incoming sophomore and voice performance major Victoria Hill wowed the audience, singing customized lyrics of the classic My Fair Lady’s “Wouldn’t It Be Loverly,” with a twist, and a new song title “Reinhardt is so Lovely.” Lyrics were penned by Dr. Mallard.